Life in the digital age 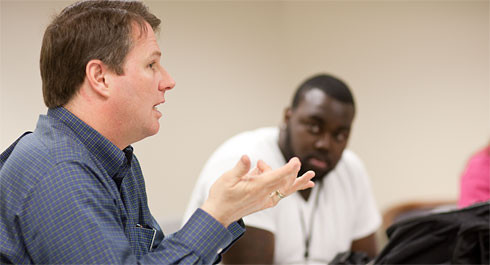 Why a seminar on the social implications of digital technologies?

There are so many things we can do with computers, but how these things happen is a mystery to many people. Exploring how society and technology interact, and learning more about how computers and networks really work, helps remove the mystery and improve our ability to control technology.

Tell me about the student blog from the spring 2009 seminar.

Students posted their thoughts on issues and events, and commented on each others’ posts, leading to a different dimension of conversation on the issues. Some people find that the informality of blog posting enables them to express themselves more freely than in more structured formats. Our course blog is available for all to read, although contributions were limited to course members.

Which topic sparked the most heated debate?

We had a number of spirited conversations relating to intellectual property, especially regarding access to copyrighted material. Because it is so easy to find and freely download music, movies, TV shows, etc., producers and distributors of these items have developed digital rights management (DRM) systems to try to stop this free access. Some students were strongly opposed to the use of DRM, arguing that blocking access to this kind of material artificially impedes the power of digital technologies, restricts the free flow of information, and stifles creativity. Other students argued that the creators of the material have the right to control the use and distribution of their copyrighted property and receive compensation for their work, thus encouraging creativity. While the class didn’t reach a consensus on the topic, students on both sides achieved a greater appreciation of the complex issues involved.

Your seminar also addressed the “digital divide.” What is this?

Within the U.S., the digital divide refers to unequal access to computers and networks between groups defined by economics (poor vs. rich), location (rural vs. urban), age, race, etc. Those with less access are increasingly disadvantaged as society’s dependence on technology grows. For example, a growing number of companies no longer accept paper job applications. Submitting an online application has many advantages for both the employer and the applicant, but can be very difficult for a person without Internet access or familiarity. There is also a growing global digital divide between developed and developing countries, with poorer countries increasingly being left behind.

Will this gap close or widen?

In the U.S., low-cost devices and Internet connections seem to be more available than they once were. The consensus among the seminar students was that, while the digital divide leaves some people at severe disadvantage, the fraction of disadvantaged people seems to be slowly decreasing. Globally, however, the differences between digitally developed and undeveloped countries seem to be increasing.

How fast is technology changing?

When Steve Jobs and Apple Computer were first developing the Macintosh, they hoped to create an information appliance no more difficult to use than a toaster. While we certainly have not yet reached that level of simplicity, computing technologies have advanced so far that no one thinks it even notable that we can instantly communicate with almost any location on earth; stream seemingly unlimited amounts of music, video, commentary and live events; have immediate access to encyclopedias that are updated in real time; or that, on a whim, we can get a satellite picture of almost anyone’s backyard. This is all made possible by a communication medium unlike any previously seen: the Internet.

How is the Internet changing communication?

By providing an immediate, worldwide communication medium, it is possible to connect with almost anyone anywhere with very little cost or effort. The specific tools needed for this are also easy to access and use. Texting, instant messaging and e-mail are pervasive. Social networking Web sites such as Facebook, MySpace, LinkedIn, Twitter and blogs have extended this kind of connectivity beyond private one-to-one conversations, making it just as easy for someone to communicate with perhaps thousands of “friends” simultaneously. Casual social interactions are easier, helping people create new relationships and maintain distant contacts. At the same time, unwanted, potentially risky connections can also result. With the ease of anonymity and falsification, inappropriate or otherwise unpleasant communications are easier for an unscrupulous person to create.

How has the Internet changed the role of the computer scientist?

The discipline and theory of computer science is much the same. The application of information manipulation towards specific hardware and software developments, however, has certainly changed. The practice of computer science is increasingly focused on distributed applications, lightweight but powerful consumer hardware (NetBooks, iPhones, etc.), and the increasing challenges of safety and security of the vast amounts of information exchanged through the Internet.

How is the Web changing higher education?

Social networking sites can catalyze the creation of “communities.” With the ingenuity and creativity that seem to grow organically out of the Web it would not surprise me to see a popular new site emerge where students form groups with similar interests that eliminate geographical boundaries. One step in this direction is the growth in the number of videos of university lectures that are being posted on YouTube and on Apple’s iTunes U, but these are examples more of a one-way publication of information, not a full-fledged interactive sharing of experience.

What will you do differently when you teach the seminar next spring?

I’ll be updating the seminar to current technologies and events. For example, as seen in the recent contested election in Iran, Twitter has emerged as a potentially significant force in focusing public opinion. Also, based on feedback from participants in spring 2009, I plan to increase the use of group and interactive activities in the seminar. In particular, the student-led debate classes proved to be very successful, providing students with opportunities to dive deeply into topics of particular interest.