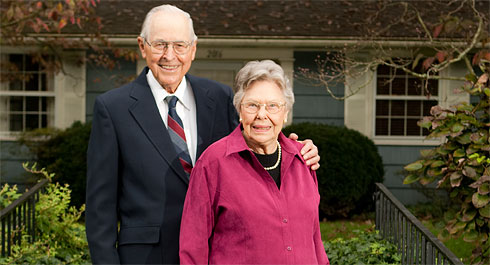 Henry Stroupe (’35, MA ’37), the founding dean of the Graduate School of Arts and Sciences and one of the last surviving faculty members to have taught on the Old Campus, died on Aug. 20 in Winston-Salem. He was 95.

He is survived by his wife, Elizabeth; two sons and their wives, Steve (’66) and Jane (’67), and David (’68) and Kim; and two grandchildren, Stephen Christopher and Margaret Elizabeth (’97).

Stroupe joined the history faculty in 1937 and served as director and later dean of graduate programs from 1961 until retiring in 1984. He received Wake Forest’s highest award for service, the Medallion of Merit, in 1998.

“He stands high in Wake Forest’s history,” said Professor Emeritus of Religion Carlton Mitchell (’43), who was a student at Wake Forest when he met Stroupe. “He was very valuable in preserving and building the bridge between the old Wake Forest and the new Wake Forest. He represented the best of old Wake Forest, but he was determined that it should grow, as it did, and the graduate school was an important part of that.”

Stroupe and Mitchell played golf together for 50 years until health problems forced Mitchell to give up the game several years ago. But Stroupe, even into his 90s, continued to play several times a week and had shot his age just a few weeks ago, Mitchell said. Besides his passion for golf, Stroupe was also known for keeping the yard of his Faculty Drive home in meticulous condition. After he retired, he and his wife traveled extensively and visited all seven continents, saving Antarctica for last.

Friends remembered his unassuming nature and a quiet, steady manner of getting things done. “He had great integrity and was a very considerate man to work with,” Mitchell said. “He was a deeply caring person and a very insightful person.”

Edwin G. Wilson (’43) was provost for much of the time that Stroupe was dean of the Graduate School. “Henry Stroupe will be remembered as one of the founders of Wake Forest in Winston-Salem,” Wilson said. “Bringing with him the best and most enduring traditions of the Old Campus, where he had been both a student and teacher, he taught American history, chaired the history department during a lively period of growth and expansion, and became the first dean of the graduate school, overseeing the development of both MA and PhD programs. He always welcomed any assignment that would bring new strength to the University he loved.”

A native of Alexis, N.C., in Gaston County, and the son of a Baptist minister, Stroupe attended Mars Hill Junior College before coming to Wake Forest in 1933. He taught his first class as a senior in 1935 as a teaching fellow in social sciences before joining the faculty full time in 1937. He received his PhD in history from Duke University in 1942 and, after serving in the Navy during World War II, returned to Wake Forest permanently in 1946.

When Wake Forest moved to Winston-Salem in 1956, Henry and Elizabeth Stroupe, like many other faculty couples, built a house on Faculty Drive, and were the last of the original 23 homeowners on Faculty Drive. “I remember sitting out on the front porch late one evening in the first two or three days and it was so quiet. There was nobody else around,” Henry Stroupe recalled in a 2006 interview with Wake Forest Magazine. “I walked to campus most of the time. It took me seven minutes to walk to the library where the history department was first located.”

In 1982, he received the Christopher Crittenden Memorial Award from the North Carolina Literary and Historical Association for his contributions to the advancement of North Carolina history. He was also interested in Wake Forest’s history and helped relocate and restore the Calvin Jones house — now home to the Wake Forest Birthplace Museum — in the town of Wake Forest.