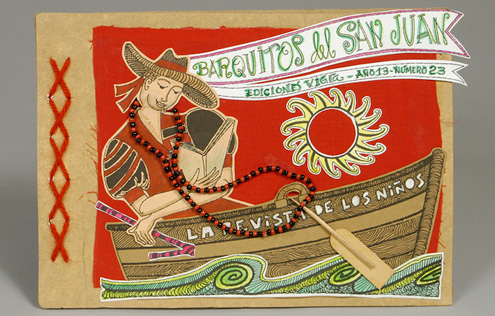 For years, there have been two primary images of Cuba, cigars and Castro. Through an exhibit featuring more than 100 handmade books and prints created by Cuban artists and writers, a Wake Forest professor and students are providing a window into the complexities of modern Cuba.

“Cuban Artists Books and Prints: 1985-2008” is on display at the Charlotte and Philip Hanes Art Gallery through Oct. 6. The show features about 120 pieces, including handmade books and other objects created by 13 contemporary Cuban painters, sculptors, photographers and printmakers.

The 50th anniversary of the Cuban revolution is a good time to reflect on what has transpired historically and culturally and to observe how Cuba’s legacy is interpreted, says Professor of Romance Languages Linda Howe, who led the project that brought together artists and a small Cuban press called Ediciones Vigía, with about 60 students and other faculty and staff who worked on the project.

The bilingual show provides an inside look at Cuban culture, going beyond stereotypes. “It is also an occasion to celebrate a vibrant culture,” Howe said. “These artists have survived cultural politics, difficult living conditions, and, at times, resource shortages that limited their access to the most basic materials, like paper.”

Students enrolled in Howe’s class “Entrepreneurship in Art Education and Educational Outreach” helped organize the exhibit’s content. Other students wrote descriptions for all the books in the show and helped prepare a bilingual exhibition catalog. Students also helped develop a documentary film, business plans, a traveling exhibition, a Web site, a symposium on Cuban history and culture, and lesson plans for K-12 teachers around the country.

“My goal for this project was to convert my students into travelers rather than tourists, people who see beyond the headlines and make a sincere effort to understand another culture,” Howe said.

The show opened last May at the prestigious Grolier Club in New York City, with a related symposium hosted by the Museum of Modern Art. The exhibit will travel to The Fleming Museum in Vermont and then to Latino Arts, Inc. in Milwaukee, Wisconsin, after the conclusion of the Wake Forest show.

Many of the books in the show were designed for Ediciones Vigía, a collaborative artists’ press founded in 1985 in Matanzas, Cuba. The only press of its kind in Cuba, it began with a mimeograph machine and a borrowed typewriter. Its handmade limited editions of works by leading Cuban and foreign authors are designed and illustrated primarily by Rolando Estívez. Several of these unique books are collages with cloth, leaves, sand, craft paper and wood scraps.

Though most of the artists whose works are in the exhibit still live in Cuba, some of their work is critical of the system. Inside a book-sized matchbox, René Bravo Quintana’s matchstick character Spark comments on the 1990s “Special Period,” when the government required energy-saving practices to avoid economic collapse. With a touch of humor, the book suggests the revolution may have lost some of its spark.

An umbrella, a large kite-shaped print, and a dress are among the works of art that provide clues about Cuban culture and insight into the artistic imagination. Some pieces present routine Cuban activities in a fanciful way. For example, in Sandra Ramos’s Alice’s Last Trip, Alice in Wonderland and friends join Cubans to wait in long lines for endless hours to catch a bus.

In “I Spent Most of the Winter in Rhineland Writing These Boleros: A Fully Illustrated Winter Book,” Antonio Eligio (Tonel), reveals his trails and tribulations as a Cuban artist living abroad in the 1990s. Carlos Estevez, who now lives in Miami, created a doll with a set of clothes covered with elaborate philosophical writings.

“The doll is my favorite work in the show,” said Lauren Gray (’09), who worked on the project last year. “It made me search for the details of each piece to find the realities, complexities, and ties to Cuba that I knew were present in every work. It made me think about what was important in my life, how my life was different from many of the artists’ involved in the exhibition, and how experiences shape us all and affect our perceptions.”

In 1997, Howe founded Wake Forest’s summer academic program at the University of Havana and directed it until 2005, when the U.S. government restricted student travel to Cuba. Students involved in the program helped Vigía Press translate and fabricate the books. Howe also conducted research for her book, “Transgression and Conformity: Cuban Writers and Artists after the Revolution.” As a result, she established strong relationships with artists and writers.

The Cuban Artists project is sponsored by Wake Forest University; The Museum of Modern Art; The Grolier Club; InterAmericas/Society of Arts and Letters of the Americas, a program of The Reed Foundation; and The Cuban Artists Fund.