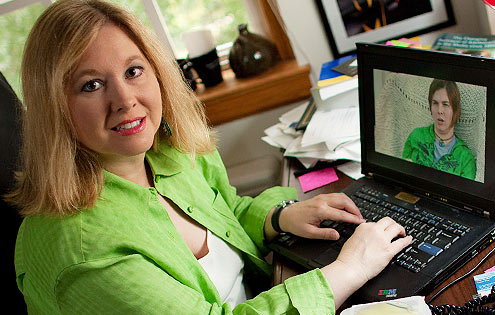 With students and teachers heading back to school, Mary Dalton (’83), associate professor of communication and co-author of “Teacher TV: Sixty Years of Teachers on Television,” takes a look at her top 10 teacher TV shows and what they say about society and education.

1) The Wire (HBO, 2002-08)
Season four of this series, which focuses on a Baltimore middle school, is the most realistic look at teaching I’ve ever seen. It looks at the institution of education in addition to an individual classroom teacher, a former police detective who finds that things are not so different in his math classroom than on the streets outside.

2) Friday Night Lights (NBC, 2006- )
Like so many coaches in television and movies, Eric Taylor is a “molder of men,” but his wife, Tami, is the glue that holds the school (and the town) together, originally as the Dillon High School guidance counselor and more recently as the school principal.

3) My So-Called Life (ABC, 1994-95)
Like “The Wire” and “Friday Night Lights,” this is a series that was more popular with critics than it was with viewers at the time. In addition to its many other notable narrative elements, this series gave viewers the first gay teacher shown in the classroom on prime time television, a well-developed and indelible character.

4) The Paper Chase (CBS, 1978, Show-time, 1983-86)
It’s quite a leap from middle school and high school to the Ivy League, and especially into the classroom of the brilliant but cantankerous Professor Charles W. Kingsfield Jr., but the interactions between the professor with his upper-crust demeanor and James T. Hart, a student straight from a farm in Iowa, crackle.

5) Our Miss Brooks (CBS, 1952-56)
The production values of early sitcoms seem primitive to contemporary viewers, but Connie Brooks sure knew how to work this role and imbue the spinster school teacher with a hard edge and, at times, a tongue-in-cheek delivery that suggests more was going on in this series than meets the eye.

6) Mister Peepers (NBC, 1952-55)
Robinson Peepers counters the boldness of Connie Brooks, his contemporary on TV, with a gentle nerdiness that is surprisingly enjoyable to watch and reassuring because this devoted teacher may seem meek, but he is smart and tenacious and generally prevails over blustery administrators and other teachers who think they know what is best for him.

7) The Bill Cosby Show (NBC, 1969-71)
Before he played Cliff Huxtable on one of the most popular shows in television history, Bill Cosby was Chet Kincaid, a physical education teacher and coach in a TV world that was perfectly integrated and where messages about “tolerance” were presented broadly and implicitly because, after all, just having an African American character in a title role made a statement in 1969.

8) Boston Public (FOX, 2000-04)
When this series was not just weird (as it was at various points after the first season), it could be captivating. It’s notable because it presents a collective social space that is multicultural and deals openly with an intoxicating array of cultural issues. It also marks a big advance in the depiction of women teachers, who are finally allowed to balance their work with intimate relationships without having to choose one or the other.

9) Welcome Back, Kotter (ABC, 1975-79)
This might not be a great series when you watch it now (there were plenty of trite plots and corny jokes), but I was 13-years-old when it premiered, and it did star John Travolta, so I tried to never miss an episode (remember, this was before we had VCRs).

10) Breaking Bad (AMC, 2008- )
This revisionist series is so dark that it is hard to watch, but there is a remarkable complexity to the characterization of high school chemistry teacher Walter White as he discovers that he has terminal cancer and decides to put his chemistry skills to work cooking meth to make money to leave to his pregnant wife and teenage son, who has cerebral palsy.