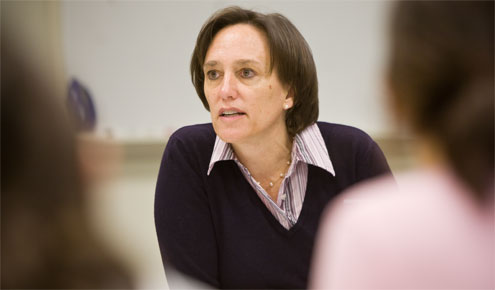 Drinking. Drugs. Caving into peer pressure. When parents expect their teenagers to conform to negative stereotypes, those teens are in fact more likely to do so, according to new research by Professor of Psychology Christy Buchanan.

“Parents who believe they are simply being realistic might actually contribute to a self-fulfilling prophecy,” says Buchanan, who studies adolescent development and behavior. “Negative expectations on the part of both parents and children predict more negative behaviors later on.”

In her study, published in the Journal of Research on Adolescence, Buchanan found that adolescents whose mothers expected them to take more risks and be more rebellious reported higher levels of risk-taking behavior than their peers one year later. The same was true for adolescents’ negative expectations.

“Higher expectations for risk-taking and rebelliousness predict higher levels of problem behavior, even controlling for many other predictors of such behavior,” Buchanan says.

More than 250 adolescents and their mothers participated in the study. The adolescents were sixth or seventh graders at the beginning of the study; they were resurveyed a year later. The study was co-authored by Johna Hughes at the University of North Carolina at Chapel Hill.

Parents who expect their kids to suddenly become James Dean when they turn 13, even if they have not been rebellious earlier in life, might be making an important mistake. “Sometimes parents expect more negative behavior from their own adolescents than they should based on the adolescent’s history of behavior,” Buchanan says.

“By thinking risk-taking or rebelliousness is normal for teenagers and conveying that to their children, parents might add to other messages from society that make teenagers feel abnormal if they are not willing to take risks or break laws. This can mean, for example, that when parents expect teens to drink before they turn 21 or to engage in other risky behaviors, kids are less likely to resist societal pressures to do so.”

Because negative risk-taking during adolescence can lead to a variety of problems, parents should not be naïve about the possibility of such behavior, Buchanan says. But expectations that adolescents can not only resist such pressures but also exhibit positive behaviors might help reduce the incidence of negative risk-taking.