Tales of mystery and terror 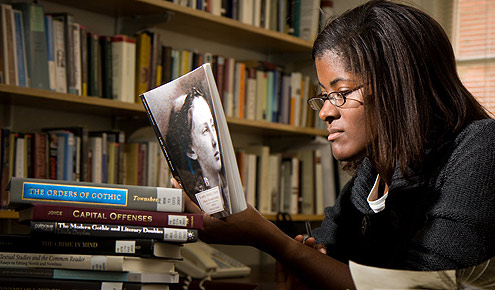 Why are we drawn to scary and mysterious stories, not only at Halloween, but throughout the year?

Assistant Professor of English Melissa Jenkins (’01) is exploring classic works of literature with her writing seminar students this fall to answer that question. “In real life, fear is unpleasant, but through these stories we can experience it imaginatively, in a safe place,” she says. “In that way it becomes an escapist, vicarious pleasure.”

Through studying the popular works of Agatha Christie and Stephen King, alongside the classical works of Edgar Allen Poe and Charles Dickens, she has students in her class, “Tales of Mystery and Terror,” examine the power of the authors to generate fear through a work of fiction.

She draws a clear distinction between horror stories — think slasher films — and tales of mystery and terror. “A horror film or book shows you the dead body. Terror shows a white sheet over something that might be a body or could be something else. Rather than focus on the shock factor, terror fiction forces you to approach problems logically. You learn to train and question your gut reactions.”

Jenkins says horror stories are often deeply moral, with clear messages about right and wrong. “The farther you get from the horror genre, the more deliciously complicated the stories become,” says Jenkins, who joined the faculty in 2007 after earning her master’s and doctoral degrees from Harvard. “Even Mr. Hyde has unexpected virtues that we identify with and make us question our own capacity for good and evil.”

Jenkins teaches her students that scary stories are not written in a vacuum, that the writers are responding to real social anxieties of their time. “Frequently the fear of technology is at the heart of the story,” she notes. “For instance, 19th century writers were responding to fears about grave robbing and anatomy labs, while later writers wrote about aliens and supercomputers.”

The students began the semester acknowledging their own fears, which ranged from clowns and fires to illness and death, but Jenkins says she knows their biggest fear: “Writing papers!”