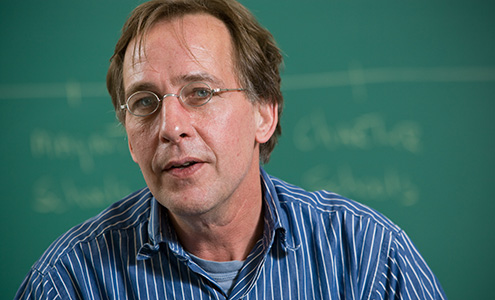 Will the Obama administration’s $4.3 billion Race to the Top Fund transform America’s schools? Not likely, says Associate Professor of Education Scott Baker. Like other forms of accountability in vogue today, the Race to the Top keeps the focus on high-stakes testing to drive educational reform and reduce racial and ethnic gaps in educational achievement.

“Perhaps this will produce better results, but I’m skeptical,” says Baker, an expert on high-stakes testing, teacher testing, and the achievement gap. “I don’t think anybody would disagree with Obama’s assertion that ‘it’s time to start rewarding good teachers and stop making excuses for bad ones.’ However, we do not, at this time, have assessment systems that can capture a teacher’s work in all its complexity.”

The Race to the Top Fund is a competitive grant program announced earlier this year by the U.S. Department of Education to help reform the country’s schools. The fund was authorized under the American Recovery and Reinvestment Act of 2009, popularly known as the economic stimulus plan.

States can begin applying for funds later this fall. To receive grants, states and school districts must tie decisions about teacher compensation and evaluation to student test scores. The fund has taken on even more importance because many states have used stimulus money to fill budget holes and rehire teachers who were laid off rather than innovate.

Secretary of Education Arne Duncan has the right idea when he says that the best ideas for education reform will come from outside Washington, Baker says, but he argues that existing merit pay systems in North Carolina, Florida and Texas have done little to increase the capacity of teachers to improve student learning. The state of North Carolina has been paying bonuses to all teachers in schools that fufilled expected or more than expected growth in student achievement since the late 1990s. Baker says these financial incentives have done little to close achievement gaps between whites and students of color.

“Linking the pay and promotion of teachers to student test scores is a politically appealing idea, but using test scores to determine who is effective and who is not is too complex a question for standardized tests to answer,” he says.

Too many factors outside the teacher’s control — a student’s background, special needs or English language facility — complicate attempts to measure the effectiveness of one teacher against another, he says. “Like good parenting, good teaching is a complicated endeavor that cannot be measured by standardized test scores. Tests scores can certainly provide valuable information, but they are not the answer.”

During the last three decades, and especially since passage of No Child Left Behind in 2002, Baker says school systems have increasingly looked to standardized tests as a panacea for problems that have deep historical roots. But there is little evidence the Obama administration will support a major overhaul of the legislation, he says.

Gains in student achievement since the implementation of No Child Left Behind have been meager, he notes. The latest test results, released in mid-October by the Department of Education, show the initiative has done little to improve overall student achievement or close gaps between white and minority students.