Researching the iconic images of war 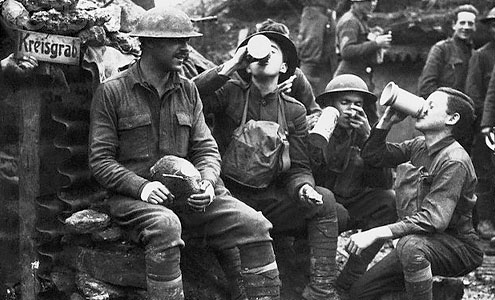 Images of the American soldier — captured by photographers on battlefields from the Civil War to Iraq and Afghanistan — have changed over time, according to Charlotte C. Weber Professor of Art David Lubin, who studies iconic images.

During World War I, the dominant images were of “heroic, youthful figures, often pictured against a bleak landscape,” says Lubin, who is writing a book on World War I. The idealistic, innocent “boy off the farm” was the iconic image associated with that war.

During World War II, the dominant image was one of the GI Joe, the rugged American Yank with a cigarette dangling from his mouth and a confident look on his face that he had a job to do of cleaning up the mess in Europe, he says.

As the Vietnam War progressed, so too did images of soldiers, from heroic to troubled, reflecting the anti-war sentiment back home. The “burned out shell of a man, full of despair” became a defining image.

During the Persian Gulf War, the iconic images were of jet fighters flying high above the ground and armored tanks. “It was hard to humanize the common soldier,” in that conflict, he notes, so the images often associated with this war are of Gen. Norman Schwarzkopf.

Today, with U.S. troops fighting in Iraq and Afghanistan, “we are awash with images, so finding iconic images is almost impossible,” Lubin says. Plus, the prevalence of video has lessened the power of still photography. And with the military more and more controlling what photographers — and the public — can see today, it’s often the photographs the military doesn’t want us to see, like the photographs of Abu Graib, that capture our attention.

Lubin teaches courses on the history of art, film and popular culture. His 2003 book, “Shooting Kennedy: JFK and the Culture of Images,” explores images associated with John F. Kennedy’s life and death. He has written about social class, social mobility, migration and other issues in “Titanic” (1999). He is also the author of “Act of Portrayal: Eakins, Sargent, James” (1985) and “Picturing a Nation: Art and Social Change in Nineteenth-Century America” (1994).