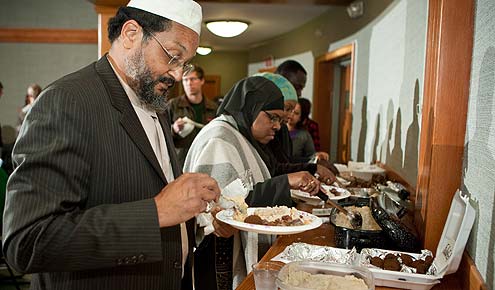 The smell of lamb specially prepared with cinnamon and middle-eastern spices filled the air as religion professor Nelly van Doorn-Harder, her students and more than 60 members of the Wake Forest and local community — Muslims and non-Muslims — celebrated a traditional Muslim feast, the Feast of Sacrifice, on Nov. 23. The feast presented a unique opportunity to share an abundance of food, good company, thankfulness and generosity, similar to an American Thanksgiving celebration.

“All of our Muslim students are American, so they celebrate Thanksgiving, but often the major feast of Eid ul-Adha goes unnoticed, says Van Doorn-Harder, who is not Muslim, but who teaches a class on “Introduction to Islamic Traditions.” “That the two celebrations fall so close together this year — a very rare happening — offers us an opportunity to share the celebration in a unique way.”

Along with the lamb, the feast included rice, hummus, falafel and other traditional foods. Van Doorn-Harder ordered a whole lamb large enough to feed the group while still having some left over to share — something she could not have done without help from Sonny Koontz (MA ’01) whose grandson, Zachary, is a freshman. Koontz shared the cost of the meat for the feast. A local café, Mooney’s, and a Winston-Salem Middle Eastern market, Mediterasia, also donated food for the celebration.

The donations are in keeping with the spirit of charity that surrounds the Eid ul-Adha, said Van Doorn-Harder. As part of the traditional celebration of the Feast of Sacrifice, a portion of the food served at the feast was wrapped separately and donated to Wake Forest’s Campus Kitchen for distribution to the hungry in the community.

Muslim students in Van Doorn-Harder’s class shared lessons on the meaning of the celebration and provided traditional music. One of those students, freshman Abdul Mojeeb Nazeri, from Richmond, Va., said he hopes the feast helped people learn more about Islamic traditions. “The purpose was to bring the community together to share a meal — forgetting all our differences.”

“Those who attended the meal were able to experience a holiday totally different and yet similar to their own respective celebrations,” added freshman Katiana Garagozlo of Melbourne, Fla., another Muslim student in Van Doorn-Harder’s class. “I hope that the parallels between Islam and other religions were evident — especially that of charity and sharing abundance.”

The Feast of the Sacrifice is celebrated after the Hajj — the annual pilgrimage to Mecca, which is a moral obligation that must be carried out at least once in a lifetime by every able-bodied Muslim who can afford to do so.