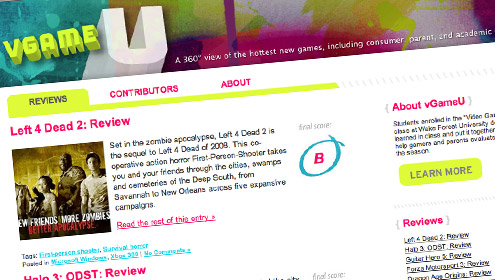 The blog, VGameU, mixes the students’ reviews of the games with tips for parents and insights gained from academic research.

“They are university students, so, of course, each game gets a letter grade,” said Associate Professor of Communication Marina Krcmar, who teaches the class.

“Students learn that video games can be studied analytically. I hope that learning about the negative effects of violent game play can help mitigate negative outcomes.”
— Marina Krcmar
Associate Professor of Communication

“I have learned how much more in depth and complex people’s responses are to games and how complex their interactions with them can be.”
— T.J. Scholberg
Duxbury, Massuschetts

“A lot of reviews out there are by 30 to 40-year-olds writing for video game retailers. I’m only 18 and offer a younger perspective.”
— Ford St. John
Canton, Connecticut

“I have a little brother. I tell my mom what games are good for him and what ones are not.”
— Matt DiDomenico
Tempe, Arizona

“The class has shown me some of the negative effects of video games. Knowing more of the research might affect my video game choices and the amount of time I play.”
— Sal Scifo
Oakton, Virginia

The four students — Sal Scifo, Matt DiDomenico, Ford St. John and T.J. Scholberg — volunteered to spend time outside class to review games. Based on what they read and discussed in class, they worked with Krcmar on criteria for the reviews.

The students evaluated each game based on its challenge of play, graphics, replay value, narrative, ease of controls and social playability.

In a section for parents, they evaluated objectionable content, including sexual content and violence, and addictiveness. A section on the “academic perspective” focuses on current academic research on video games.

St. John said the blog presents a different perspective from other game review sites. “A lot of reviews out there are by 30 to 40-year-olds writing for video game retailers. I’m only 18 and offer a younger perspective.”

He says he thought about everything he would want to know when considering a video game purchase. “Now that I buy everything with my own money, I’ve learned to become an informed consumer. We’re trying to make the reviews as helpful as possible, so people won’t make purchases they’ll regret later.”

Krcmar said she expects the blog to be a valuable resource for parents. “The T-rating and M-rating for video games are not very consistent and not very informative for parents, so parents need more information,” she said. “I would like parents to use the blog to make sound media decisions for their kids.”

DiDomenico said he drew on his own family to write the parent section of his reviews. “I have a little brother,” he said. “I tell my mom what games are good for him and what ones are not.”

“We describe for parents what is really going on in the game,” Scifo said.

The class has had an impact on how students think about one of their favorite pastimes. “The class has shown me some of the negative effects of video games,” Scifo says. “Knowing more of the research might affect my video game choices and the amount of time I play.”

He has become fascinated with the research on the negative effects of video games on aggression and that has influenced his reviews.

St. John says he has learned a lot from the class about video game content and what goes into the choices people make about media. For a class assignment, he researched “physics engines,” the computer programs that simulate the effects of velocity, friction, wind resistance and other variables to improve realism in a video game. He applied what he learned in evaluating the graphics in some of the new games for the blog.

“I have learned how much more in depth and complex people’s responses are to games and how complex their interactions with them can be,” says Scholberg.

The students, not Krcmar, chose all the games to review. “I’m a researcher, not a video game player,” she said.