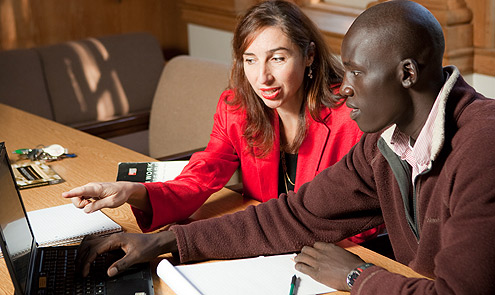 Born in the midst of a civil war in Sudan, senior Leek Deng spent his early years living in a refugee camp in Kenya. Last summer, nine years after leaving Sudan for the United States, he returned to Africa to volunteer at a hospital in Kampala, Uganda.

While there, he interviewed doctors and nurses for his research on health care for displaced persons. “In Uganda, having a one-on-one session with a physician is a process that takes weeks if not months,” he explains. “And getting to the hospital for most patients is too costly. I realized during my time there that the solutions to access to healthcare require a multidisciplinary approach. After graduation, I plan to study public health so that I might be able to help solve some of these issues.”

As a freshman, Deng enrolled in Associate Professor of Sociology Ana Wahl’s first- year seminar on work in America. Intrigued by the subject, Deng decided to major in sociology. Besides finding a course of study for his college career, he also found a mentor who encouraged him to take advantage of opportunities for study outside of the classroom.

Perhaps not surprisingly, some of the issues facing refugees with regards to health care are similar to issues faced by Latin-American immigrants in the U.S. — a research focus for Wahl. Wahl worked closely with Deng to define the scope of his research and secure funding for his independent study abroad.

“Having lived the experience, Deng is uniquely suited to conducting research on medical care for refugees,” says Wahl. “He brings a critical perspective to his work and raises the sorts of questions that individuals who are most disadvantaged might raise. He has a sophisticated perspective on the realities of life for refugees.”

“Wake Forest has given me the resources and the opportunities to set my goals high, and I’ve had what I need at my disposal to accomplish what I would like to do,” he says. “Although I can never fully repay those who have helped me along my way, I carry on their legacy of giving back to those who are truly in need.”