Making sense of the census: Sociologist explains the 2010 Census and why it matters 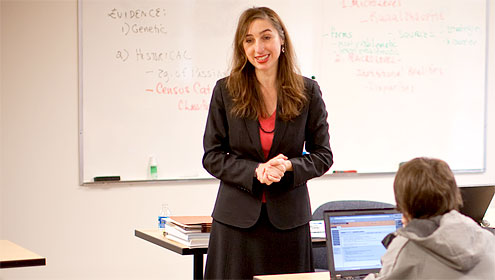 It’s time again for Americans to stand up and be counted. In mid-March, census forms will be mailed or delivered to households across the country. Associate Professor of Sociology Ana Wahl, who studies housing patterns and racial integration in neighborhoods, explains the importance of the census, why fewer people may complete this year’s survey, and how she uses census data in her research and teaching.

Why is the census important?

The census is, first and foremost, a population count that is conducted every 10 years. The United States has been conducting a census of the population since 1790. Census information is used to determine the number of seats a state holds in the U.S. House of Representatives.

In addition, the allocation of billions of dollars in federal spending for public services like hospitals, schools, senior centers, roads and other public works is based on the information collected through the census. Finally, marketing firms, non-profits and other organizations use the census routinely in their work.

Why is the census important historically?

Anyone who completes the census leaves behind a permanent record of his or her place in history. I recently found the original census manuscript on which my grandmother’s household was recorded in 1930. That record indicates that she lived in a household with several older brothers who had worked in the mines of Pennsylvania, a common occupation for working class men at that time. Her mother, like many others, took in boarders to supplement the family income. The census record also indicates that my grandmother lived in an “ethnic enclave” of sorts where immigrants from all over Europe had settled. These pieces of information provide insight to her lived experience as well as that of many other Americans at that time.

What kinds of data are collected?

The census literally counts every person living in a “household” in the United States — or at least this is the goal. In this country, we have also collected information about the racial composition of each household every time we have conducted the decennial census. In this sense, the census is the most comprehensive source of statistical data about our multiracial/multicultural history.

In 1790, for example, each “head of household” was asked to report the number of free whites (broken down by gender) and slaves. In the last census, a “short form” was sent to each home address with six questions tapping the racial/ethnic composition of households as well as family composition. A “long form” that included more than 50 questions, was also sent to one out of every six households to collect information on household income, educational attainment, occupational attainment, commuting patterns, language use, and many other aspects of social and economic life.

How do you use census data in your research?

Census data is a key source of information about population demographics like race/ethnicity, poverty rates, educational attainment, home ownership and countless other aspects of our social and economic life. In my own research, I have used census data on the racial composition of neighborhoods to examine residential segregation across time and place. I use census data to determine if neighborhoods in cities like Winston-Salem are significantly less segregated than they were 20 years ago. This represents one of the most important ways that sociologists can tap the gains we have made in the post-Civil Rights era — and, of course, this research also indicates that much work remains if we are to live in meaningfully integrated neighborhoods. Without census data, we would be unable to systematically measure residential segregation and integration.

Do you do projects with your students related to the census?

Absolutely! I integrate census data into all of my courses in as many ways as I can. Students are introduced to the key pieces of data provided by the census — and then they are asked to gather and analyze census data for several projects. The most interesting assignment, I think, requires students in my Social Problems class and my Race and Ethnic Relations class to literally map the patterns of residential segregation that persist in their hometowns — and then they examine a statistic that we call the “index of dissimilarity” to determine the level of segregation. This exercise provides a powerful way to see the segregation that we, to some extent, take for granted, and re-examine this through a critical lens. I also use the census in my Sociology of Work, Conflict and Change class to map high poverty neighborhoods, as part of a project that examines the concentration of poverty that we see in the past few decades as a result of deindustrialization (i.e. in cities like Chicago).

Should illegal immigrants respond to the census?

This is a complicated issue. I strongly advocate the completion of the census among those who are undocumented, but I also understand why so many in this position might be reluctant to return their census forms. In the past decade, illegal immigration has become a lightning rod in political debates — and many individuals have become targets of anti-immigrant hostility as well as immigration control measures, including deportation. Given this, many are fearful of any contact with government officials and, in a sense, work hard to remain invisible.

That said, the census forms do not ask about an individual’s legal status. Furthermore, the U.S. Census Bureau works independently of Homeland Security and other law enforcement agencies, and in fact, is obligated to guarantee confidentiality to those who return census forms. By law, the census records that carry our names cannot be publicly released for 72 years. This means that completing the census forms legally carries no risk to anyone, including those who are unauthorized residents of the United States.

Are there particular issues that will likely affect participation in this year’s census?

Census officials believe that a few factors could undermine participation. First, the transient nature of many households in the past year, due to unemployment as well as foreclosures and evictions, will certainly make it more difficult to reach everyone. Second, Americans have become increasingly concerned about privacy issues and seem less willing to return all kinds of surveys. Third, many who are frustrated with the federal government may believe that it does not make any difference if they complete their census forms or not. To counter these forces, the census has launched a serious and innovative campaign to make sure all Americans understand the importance of returning census forms — and I hope it will be effective because the welfare of our communities depends on an accurate census count.