Ringing in the Chinese New Year 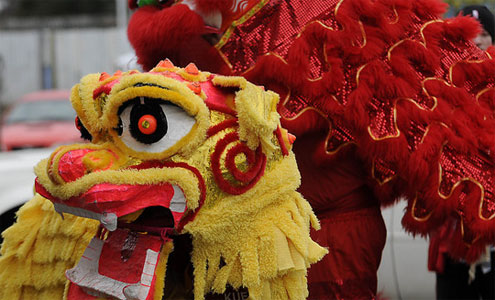 Wake Forest will celebrate the start of the Chinese New Year and the “Year of the Tiger” with several events on campus on Feb. 13.

Highlighting the 11th annual Chinese Spring Festival is a performance of the traditional Lion Dance at noon on Manchester Plaza. The event is free and open to the public. The Lion Dance and a Kung Fu demonstration will be performed by Hung Gar Kung Fu Academy of Mooresville, N.C.

The Lion Dance is associated with bringing good luck, said freshman Xizi Liao, one of the student organizers of the festival. Loud drum beats and cymbals, together with the dragon or lion face and aggressive movements of the dance, are thought to frighten away the mythical beast, Nian, who according to legend, arrives on the first day of the new year with harmful intentions.

The color red, which also scares away evil spirits, is equally important for welcoming the new year. “In China, adults often give red envelopes to children and put money in them,” said sophomore Joni Yu, another student organizer. “For our celebration we’ll be passing out red envelopes containing a card with a glossary of words related to the Spring Festival.” Yu brought the traditional red envelopes from her homeland to distribute at the festival.

Like all celebrations, food has a role to play in the festival. On Saturday afternoon, Chinese students will prepare dumplings and other Asian foods in the Luter Residence Hall kitchen to share with fellow students.

Dumplings are a part of the collective memory of the Chinese culture, and the entire family often takes part in their preparation. Liao says homemade dumplings are considered a blessing. “They differ from home to home. Every family uses different ingredients, which means every family’s dumplings taste unique.”

The festival is sponsored by the Asian Student Interest Association. “The festival celebration is not just about China,” said Liao. “It’s about peace, cooperation and respect among all people, and the Spring Festival aims to bring all cultures together. It’s also an opportunity for people to experience international diversity without leaving Winston-Salem.”