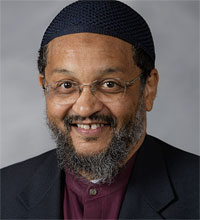 Khalid Griggs, imam of the Community Mosque of Winston-Salem, has been named Wake Forest’s first Muslim chaplain. Imam Griggs will serve as a part-time associate chaplain to provide religious leadership for the University’s growing Muslim community.

“I believe strongly that Wake Forest’s religious heritage is a strength,” said President Nathan O. Hatch. “This position will promote an even broader dialogue among people of different faith traditions and encourage a greater awareness of differing beliefs, both of which are critical to enriching the quality of our campus community.”

Imam Griggs will engage students, faculty and staff in discussions of faith, spirituality, social justice and life issues through seminars, panels and other programs, Hatch said. He will also serve on Wake Forest’s Religious Advisory and Interfaith Councils.

Chaplain Tim Auman said the position is important to ensure that the University is meeting the spiritual needs of all students as the student body becomes more diverse. “We want to provide pastoral leadership to our Muslim students and to make connections with the Muslim community off campus,” he said. “And this will offer non-Muslim students an opportunity to learn about Islamic traditions.”

A number of campus ministers, some of whom also serve Winston-Salem churches, provide support to students from a variety of faith traditions — including Baptist, Catholic, Episcopalian, Methodist, Lutheran and Presbyterian — and advise groups such as Athletes in Action, Campus Crusade for Christ and Intervarsity Christian Fellowship. Religious life advisors advise groups such as Hillel, the Baha’i Association and the Muslim Student Association.