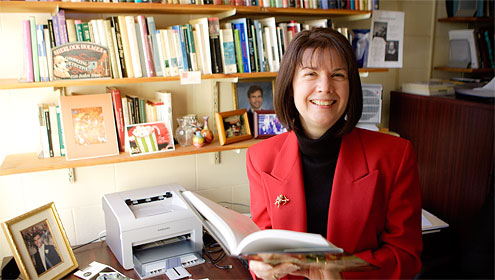 Anne Finch is considered the most important woman poet of the early 18th century. Her work, however, has never received its full critical due, largely because of the lack of a comprehensive scholarly study, says Claudia Kairoff, professor and chair of English.

Kairoff is engaged in a research project that will change all that. She and Jennifer Keith of the English department at UNC-Greensboro are working with Cambridge University Press to co-edit “The Works of Anne Finch, Countess of Winchilsea,” scheduled for publication in 2013. That year marks the 300th anniversary of the only volume of her works that Finch published during her lifetime (1661-1720).

Kairoff and Keith were awarded a long-term fellowship by the National Endowment for the Humanities. They will complete work on an important folio manuscript of Finch’s verse that is part of the collection at the Folger Shakespeare Library in Washington, D.C. Their two-volume edition will be the first complete, standard critical edition of Finch’s writings.

“Aside from incomplete editions, her work has never received the full critical attention necessary to establish the definitive texts, with thorough introductions, annotations and appendices, of her poems and plays,” says Kairoff, who joined the Wake Forest faculty in 1986. “Standard critical editions are the first places to which scholars turn when researching and writing about important literary figures, so our Finch edition will provide a resource that 18th-century scholars, poetry scholars, feminists and many others have long wished for.”

The Folger fellowship is for five to six months in the spring of 2011, but Kairoff and Keith will also travel to other libraries and rare book depositories in the United States and United Kingdom.

“I hope that being associated with this work will be beneficial to my colleagues and students, and to the University,” says Kairoff, who teaches Restoration and Eighteenth-Century poetry, theatre and non-fiction prose. “I especially love teaching women’s poetry because it is still a wide-open field for original research, theorizing and interpretation.”

Kairoff hopes that as the project progresses she will have new information to share about a body of work that has been neglected until recently. “I like to tell students there is plenty of scope for their scholarly aspirations, since many early modern writers are still being discovered and studied,” she says. “Anne Finch has always been known, if not given her critical due, but there are plenty of obscure but worthy poets waiting to be recovered.”

Most standard critical editions are produced by teams of scholars and Ph.D. students at major research universities, so she and Keith are proud to identify themselves as two professors working with master’s degree graduate assistants, she adds. “Not only will we have produced this important edition, but all scholars will know that our respective institutions are capable of supporting a research tool of considerable magnitude and complexity.”