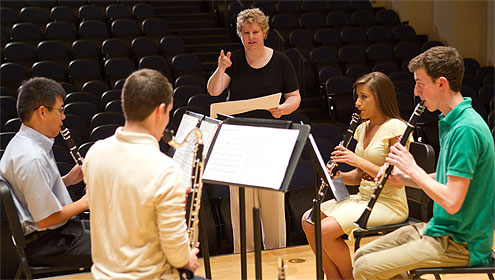 The horrors of the Holocaust are usually told through stories and photographs, but the Wake Forest Clarinet Quartet will tell the story through music when it presents the American premiere of “Immagini da Auschwitz” during the Wind Chamber Music Concert on April 15.

The piece was composed in memory of Holocaust victims by Italian musician Guido Arbonelli, a clarinetist with the Italian ensemble the Namaste Clarinet Quartet.

“I found the piece a unique depiction of the Holocaust,” said sophomore Matthew Simari, one of the members of the Wake Forest Clarinet Quartet. “Whereas the story is often told through memoirs or photographs, music adds a unique aural dimension to explore the emotion of the traumatic events. The piece is abrasive and dissonant, and for many members of the audience, unlike anything they’ve ever heard a chamber ensemble perform.”

The Wind Chamber Music Concert also will feature performances by the Wake Forest Premier Saxophone Quartet and other woodwind chamber ensembles. The concert, which is free and open to the public, will be held in Brendle Recital Hall in the Scales Fine Arts Center at 7:30 p.m.

In addition to Simari, who is from Plano, Texas, the other members of the Clarinet Quartet are sophomores Jacob Eichhorn from Greensboro, N.C., and Kayla Shipley from Westminster, Md., and junior Andre Nguyen from Charlotte, N.C.

“Immagini da Auschwitz” packs a lot of emotion into 10 minutes, said Eileen Young, an adjunct professor of music and director of the quartet. “It evokes very powerful images and emotions of those who suffered in the Auschwitz camp during the Holocaust.”

The tone and pace of the music flows from soft and slow to loud and frantic. As it builds to a close, three of the four students stop playing their instruments and softly hum through their clarinets, while the fourth plays a mournful tune. The effect is that of a haunting, despondent lament. The piece is a challenging one for students to perform, Young said, because it’s a classical piece, but one with contemporary techniques, such as the vocalization, or humming.

“Why are there so many mood changes?” Young asked the students during a recent rehearsal on the stage in Brendle Recital Hall. “There’s a knock on your door and then you’re on a train, it’s one emotion after another. Everything is happening quickly, and that is part of the terror.”

Eichhorn, the student leader of the group, selected “Immagini da Auschwitz” for the group to play from among several suggestions by Young. “What has been most challenging about the piece is the emotional aspect,” he said. “The title itself can conjure so many horrific images. Through the music, we have to create these images, whether it’s the monotonous sounds of a train car, frantic hysteria, mourning and nostalgia, or even shrieks of pain.”

Young, who plays clarinet with the Winston-Salem and Salisbury (N.C.) symphonies, has communicated with Arbonelli, the composer, who is on tour this spring with the Namaste Ensemble in New York and Colorado. Arbonelli has said he composed the piece after reading the book “Hope Saved My Life,” by a Holocaust survivor.

Simari’s great-grandparents were Jews who left Russia for the United States before the war. But other relatives were still living in western Russia during the German invasion; many were killed, and others joined the resistance, he said.

The students have practiced as a group with Young weekly since the semester begin. The piece was technically challenging to learn because of the rapid changes in tempo, range and rhythm, Shipley said.

“After weeks of practice, I finally realized that the purpose for the quick changes is to depict the fearful, sudden and surprising events the victims of Auschwitz were forced to endure,” she said. “I hope that we are able to convey these emotions to the audience, so that they not only recognize them, but feel them as well.”