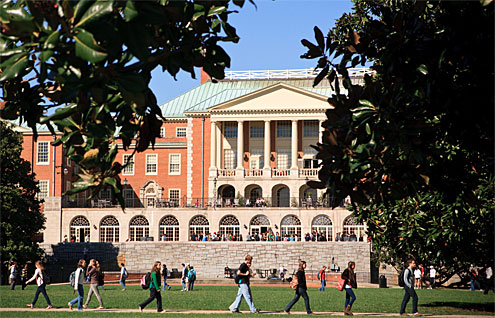 Wake Forest’s law, business and medical schools all ranked in the top 50 in the 2011 issue of “America’s Best Graduate Schools,” published by U.S. News & World Report.

The law school ranks 38th among the nation’s top law schools, up two spots from last year. The law school has consistently ranked in the top 50 law schools since the magazine’s annual report on best graduate schools began in 1990.

Wake Forest’s School of Medicine ranks 33rd in primary care and 44th in research among the nation’s medical schools.

“We are excited that our collegiate university model, which grounds professional education in the tradition and strength of the liberal arts and sciences, is being recognized for the value that it delivers to our students and graduates,” said Jill Tiefenthaler, provost and professor of economics. “Wake Forest’s law, business and medical schools each have proud traditions grounded in the practice of the classical professions with skill, creativity and a deep commitment to service in keeping with the University’s motto, Pro Humanitate.”

The graduate school rankings include programs in business, education, engineering, law and medicine. The rankings are based on opinions from experts about program quality as well as statistical indicators that measure the quality of a school’s faculty, research and students.

Highlights of the graduate school rankings are scheduled for publication in the May issue of U.S. News & World Report magazine, available for newsstand purchase on April 27.