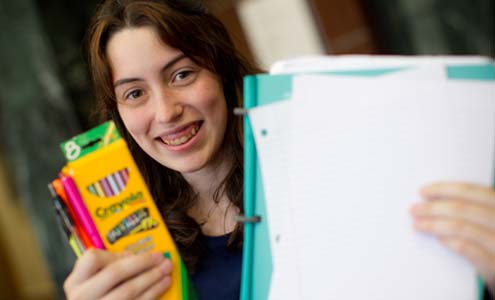 Laura George cannot erase the memory of small children clinging to a fence outside a school in the Dominican Republic, desperately hoping for a glimpse of the lessons going on inside. George, a senior studio art major from Hilton Head, S.C., was on a church mission trip when she noticed the children.

“The emotion on those kids’ faces tugged at my heart strings,” she said. “They were on the outside trying so hard to hear what the teacher was saying. I found out that they weren’t allowed to go to school because they couldn’t afford the required uniforms. All I could think was, ‘I could provide that.’”

That moment, which occurred when George was in high school, planted the seed for an innovative program called Look Smart that recently was recognized as a semifinalist in the Dell Social Innovation Competition.

Dell and the University of Texas at Austin sponsored the contest to offer seed money for student-led projects addressing human need. While George’s project did not make the final round, she’s hoping the validation of her idea and the venture plan she had to write as part of the competition will help her market Look Smart to potential donors and volunteers.

“Here in the United States, kids complain about having to go to school. In the Dominican Republic, there are kids who desperately desire knowledge, and they can’t get it because of a simple thing like a uniform,” George said. “I’ve always had a passion for education, and I’m always trying to solve problems around me.”

George’s idea is beautiful in its simplicity: Get families in the United States to recycle their outgrown school uniforms and shoes by donating them to Look Smart. Package the uniform, shoes and school supplies in a backpack, and ship them to a network of churches in the Dominican Republic that can distribute the items to children in need.

Simple, maybe, but still costly. George personally took one load of school items when she returned for another Dominican mission trip, and she mailed another load to a church contact.

Then she ran into a money roadblock. Look Smart needs money to clean the donated items, purchase school supplies and backpacks, and ship the packages.

George is hoping to attract donors and volunteers who can help get Look Smart off the ground after she graduates from Wake Forest in May. “I want to do something meaningful with my life,” she said.