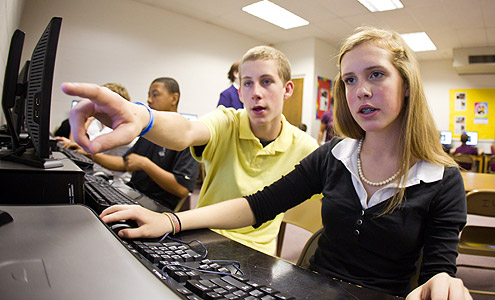 If the nation’s ability to remain an economic power rests in the hands of today’s middle-school students, then the future looks bright.

A new tool developed at Wake Forest — a video game called CellCraft — will be featured May 12 at the White House in the inaugural celebration of National Lab Day.

On May 11, 30 students at Hanes Middle School in Winston-Salem were among the first to play the final version of CellCraft, a high-action game in which players must learn the inner workings of a cell to save the inhabitants of a planet set for destruction.

“If you learn how cells work, your cell will thrive,” said Jed Macosko, an assistant physics professor at Wake Forest and science adviser of the CellCraft project. “If you squander resources or ignore threats, your cell will die.”

The video game was developed with testing at Hanes Middle School and Reagan High School. The game teaches students high-level cellular science — and, more importantly, inspires them to love it. In pre- and post-game tests, CellCraft’s developers found that middle-schoolers who played the game not only gained a greater understanding of science concepts but also said they enjoyed learning more.

“To remain a world player, we must open up a new realm of ideas for our children, one that will inspire them into careers in sciences,” Macosko said. “I think that the nanoscopic world inside the cell is just the thing.”

President Obama established National Lab Day in November to rally America’s educators, scientists, businesses and foundations to solve that crisis: The country will not be able to compete worldwide if today’s students continue to shun science careers.

Reaching middle-school students is key. A study by the Organization for Economic Cooperation and Development in 2003 showed that, among 15-year-olds in 30 of the world’s developed nations, the U.S. ranked only 18th in math and 24th in science.

And according to the National Science Teachers Association, if teachers don’t engage students in science by seventh grade, then those young people likely are lost to science careers forever.

CellCraft was funded in 2009 by a $25,000 Young Innovator Award from the John D. and Catherine T. MacArthur Foundation, via the Humanities, Arts, Science, and Technology Advance Collaboratory.