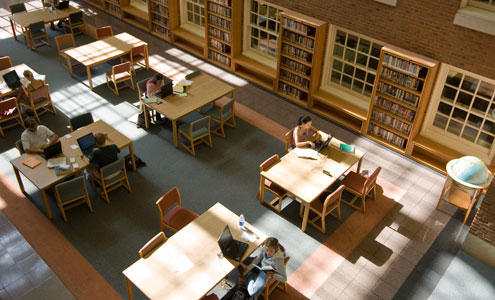 The Z. Smith Reynolds Library received three grants recently — all on the same day — to fund a symposium showcasing the work of one of Wake Forest’s most famous alumni, the late poet A.R. Ammons (’49), and to digitize collections of material from North Carolina churches and the North Carolina Baptist State Convention.

The library received a $7,600 grant from the N.C. Humanities Council to help fund the symposium, “Single Threads Unbraided: A Celebration of the Work of A.R. Ammons.” The symposium, to be held Nov. 15 and 16, will feature Ammons’ poetry, art and letters.

In addition to speakers from Wake Forest, Harvard, Cornell and other universities who will address Ammons’ works and legacy, the symposium will also include the premiere of an original one-act play, by playwright Michael Huie, based on Ammons’ letters to his future wife. Twenty major paintings by or about Ammons also will be unveiled in the Ammons Gallery in the library.

“We have many exciting things planned for the symposium that would not have been possible without the grant,” said Lynn Sutton, dean of the library. For more information on the symposium, visit this link.

Wake Forest has the most extensive collection of the bi-weekly publication, published continuously since 1834. “It’s an important research tool not only for documentation of North Carolina Baptist history but North Carolina cultural history,” said Megan Mulder, special collections librarian. “It’s very valuable to church historians, genealogists and anyone interested in the history of the state.”

A second ECHO grant, for $30,000, was awarded jointly to Wake Forest, Duke and the University of North Carolina-Chapel Hill for planning the digitization of other collections of North Carolina religious material, much of which is housed in the universities’ libraries. The materials include monographs, association minutes and church records.

“This grant will allow us to determine the priorities for digitization. There’s a lot of material out there, and we want to assess which ones are most important for researchers,” Mulder said.