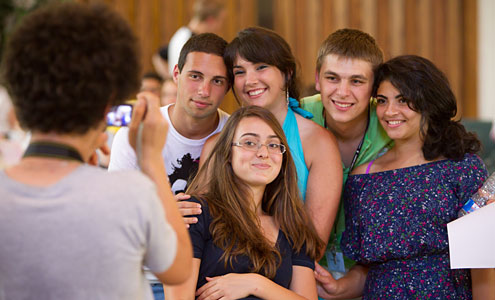 Fifty students from 38 nations gathered at Wake Forest in July to participate in a month-long diplomatic program sponsored by the U.S. Department of State.

The annual Benjamin Franklin Transatlantic Fellows Summer Institute, held for the fifth year at Wake Forest, is designed to teach teenagers about different countries, and about the shared principles and challenges they face, said Allan Louden, professor of communication and director of the program.

“The program is an investment in future understanding,” Louden said. “It aims to empower the younger generation of Americans and Europeans to face global challenges with an understanding of perspectives beyond their own region. We hope it will serve as an incubator for ideas.”

During their first week in America, the students lived on campus and attended classes, taught by Wake Forest faculty and others, on “Citizenship and Conflict,” Comparative Constitutionalism” and “Documentary Film Theory.” Then they visited Philadelphia, Pa., and Williamsburg, Va., and spent several days in Washington, D.C., where they visited the state department, the National Press Club and Mount Vernon.

For the last two weeks, they have attended workshops on civic engagement and partnered with 10 local community service agencies, such as Habitat for Humanity and the Second Harvest Food Bank.

While learning about America, they also taught others about their homelands; they visited several retirement communities in Winston-Salem to share their countries’ traditional songs and dances with residents.

For many of the teens, the institute is more personal than political. They arrived in the U.S., most for the first time, with preconceived ideas and stereotypes. The students lived with local families for nine days to get a taste of American home live.

Rosa Huhtamaki, 16, from Finland, said she was surprised by the sheer size of the U.S. and by the diversity of opinions and attitudes that she encountered during her stay in Winston-Salem and during visits to Philadelphia and Washington.

Era Tushaj, a 16-year-old Albanian, said she was struck by the openness of the Americans she met. She said that she made lasting friendships with others in the program. “I’ve learned that people, no matter where they’re from, if they see that you are a person with values they’ll always back you up.”

The goal of the program is to foster such connections between students aged 15 to 18 from former Soviet bloc nations and the former Yugoslavia, and allow them to meet peers from Western nations. Eleven American students also were selected for the institute through programs such as the International Baccalaureate program. Foreign students are chosen by their home countries’ American embassies. “The intent is to open up avenues of communication, to have contact,” Louden said.

Language is a bit of a barrier at first, but all the students speak English, which improves throughout the month, Louden said. They also often have other common languages, such as Russian.

Regardless of the words they use, the students find out they have more in common than they expect, Louden said. The students communicated even before they arrived at Wake Forest through Facebook, where they shared common interests about music, for example. “We were struck by how much culture they share because of access through the Internet,” Louden said.

It’s important for the students to return to their home countries with the idea that as individuals they can initiate civic programs when they return home, he said. “From our perspective, the intent is one of empowering, the sense that they can actually do these things and that they can go and change the world,” Louden said.