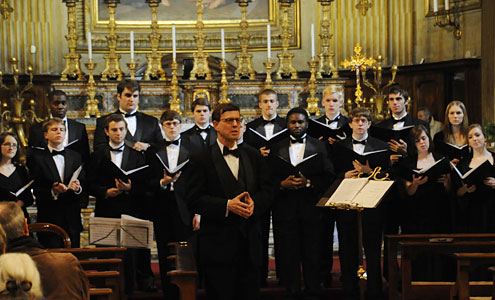 In March 2010, the Concert Choir and I completed our second international performance tour, a very successful seven-day trip to Italy, featuring four well-performed concerts in beautiful venues for appreciative audiences, and outstanding times being together as ambassadors for the music department and Wake Forest University.

Our travels on March 5 and 6 were exciting as we took a bus to Charlotte and flew to Rome via Munich. On arrival in Rome, we went through customs quickly and met our wonderful guide Viviana Lancia, arranged for us through our agency World Cultural Tours, who got us to our hotel in the Stazione Termini district and informed us in English of the sights we were seeing on the drive in from the airport.

Fifteen minutes after checking in, we walked four blocks from the hotel to the Pontifical University Antonianum for our only private rehearsal of the trip. In spite of jet lag and travel fatigue, the students spent two hours practicing their music in a most professional manner, followed by dinner at the hotel and a quiet first evening in Italy.

Our second day in Rome began with a very fine performance at the Santa Susanna Church, the English-speaking Catholic parish church of Rome on the Via Venti Settembre. We were proud to sing Gregorio Allegri’s Miserere at the morning service, and surprised that all 150 parishioners stayed after for our postlude concert and applauded for us after every selection. The group then enjoyed a walking tour of the Coliseum and Roman Forum during the afternoon and a free evening following dinner at the hotel.

On March 8, we had another sightseeing day in Rome at the Vatican and St. Peter’s Basilica. After the planned activities, the choir singers and faculty divided into two groups, one group staying in Vatican City to see the Sistine Chapel, and the other following Peter Kairoff across the Tiber River toward the Piazza Navona through the Medieval and Renaissance section of Central Rome. I headed right for the Café St. Eustachio to try their famous coffee and purchase some to take home.

Following dinner, we returned as a choir to this same area for our first full concert performance at the Basilica di Sant’Eustachio. The acoustics and decor of this wonderful church were the perfect setting for us to present all of the sacred and secular selections we prepared for tour, including our opera selections, a duet by Manuel Garcia coached by Teresa Radomski and the drinking song Libiamo from La Traviata by Giuseppe Verdi. Both pieces, and Moses Hogan’s Elijah Rock, were big hits with the listeners.

By far the most gratifying day of the tour was our March 9 trip to the port city of Anzio, about an hour southwest of Rome. We were guests of Franco and Adriana Cappelluti whose son, Christian, graduated from Wake Forest in 1997 but passed away suddenly a few years later.

The Cappellutis built Chris Cappell College and gave the campus to the city of Anzio to be a public high school in their son’s memory. Our concert in the school’s auditorium that evening was an event we will not soon forget.

Photographs of Wake Forest are everywhere on campus, which made us feel right at home. The choir sang for our largest audience yet, featuring John Kossler’s guitar accompaniments on music by Mario Castelnuovo-Tedesco and Jeffrey Van and fine piano playing from Joanne Inkman and Peter Kairoff on music of Copland and Debussy.

The mayor of Anzio and Mrs. Cappelluti presented awards to me and our faculty assistants in a ceremony on stage after the concert. But this was not the end of the evening. After a reception at the school, the Cappellutis treated the singers, faculty and many of their Anzio friends to a 10-course seafood dinner at Alceste, a restaurant on the Mediterranean Sea. We learned more about Christian and how much he valued Wake Forest and were glad to honor his memory by singing for his parents and their friends in Anzio.

The last full day in Italy took us north of Rome through the Umbrian region to the walled city of Assisi, where we sang at a service in the Chapel of St. Catherine in the Lower Basilica of St. Francis. After the service, we toured the Upper Basilica and its Giotto frescoes and wandered through the winding streets of the city.

The group traveled back to Rome for our final tour dinner at a fine local restaurant west of the city center and the singers had a few hours free to sleep or just stay awake before our very early departure at 4 a.m. for the airport and the return flights to America. The travel home day was safe and filled with goodbyes. We arrived at Scales at 6 p.m. on March 11 looking ahead to the next tour in three years.