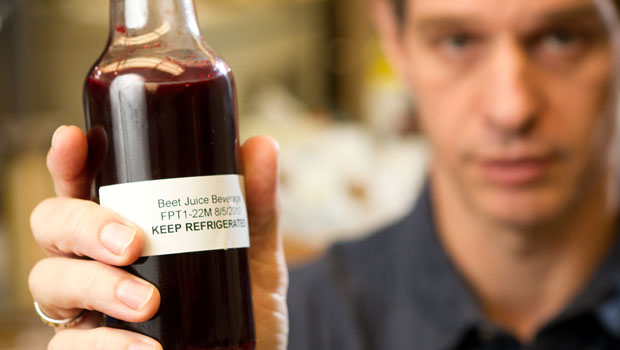 Wake Forest researchers have shown for the first time that drinking beet juice can increase blood flow to the brain in older adults – a finding that could hold great potential for combating the progression of dementia.

The research findings are available online in Nitric Oxide: Biology and Chemistry, the peer-reviewed journal of the Nitric Oxide Society and will be available in print soon. (Read the abstract.)

“There have been several very high-profile studies showing that drinking beet juice can lower blood pressure, but we wanted to show that drinking beet juice also increases perfusion, or blood flow, to the brain,” said Daniel Kim-Shapiro, director of Wake Forest’s Translational Science Center; Fostering Independence in Aging. “There are areas in the brain that become poorly perfused as you age, and that’s believed to be associated with dementia and poor cognition.”

High concentrations of nitrates are found in beets, as well as in celery, cabbage and other leafy green vegetables like spinach and some lettuce. When you eat high-nitrate foods, good bacteria in the mouth turn nitrate into nitrite. Research has found that nitrites can help open up the blood vessels in the body, increasing blood flow and oxygen specifically to places that are lacking oxygen.

In this study, the first to find a link between consumption of nitrate-rich beet juice and increased blood flow to the brain, Translational Science Center researchers looked at how dietary nitrates affected 14 adults age 70 and older over a period of four days.

On the first day, the study subjects reported to the lab after a 10-hour fast, completed a health status report, and consumed either a high- or low-nitrate breakfast. The high-nitrate breakfast included 16 ounces of beet juice. They were sent home with lunch, dinner and snacks conforming to their assigned diets.

The next day, following another 10-hour fast, the subjects returned to the lab, where they ate their assigned breakfasts. One hour after breakfast, an MRI recorded the blood flow in each subject’s brain. Blood tests before and after breakfast confirmed nitrite levels in the body.

For the third and fourth days of the study, the researchers switched the diets and repeated the process for each subject.

The MRIs showed that after eating a high-nitrate diet, the older adults had increased blood flow to the white matter of the frontal lobes – the areas of the brain commonly associated with degeneration that leads to dementia and other cognitive conditions.

“I think these results are consistent and encouraging – that good diet consisting of a lot of fruits and vegetables can contribute to overall good health,” said Gary Miller, associate professor in the Department of Health and Exercise Science and one of the senior investigators on the project.

To make the sometimes-bitter beet juice tastier – so a greater number of people will drink it and reap its health benefits – the university has worked with a company to create a new beet juice-based beverage.  The university is currently looking into ways of marketing the beverage.

The National Institutes of Health contributed funding for this research.

The Center for Translational Science; Fostering Independence in Aging focuses on the promotion and maintenance of functional health as people age. Center researchers study how diet and exercise can change cognitive and physical function. The center’s team involves medical staff, behavioral scientists and other scientists who develop research-based interventions to help both physical and cognitive health in aging populations.