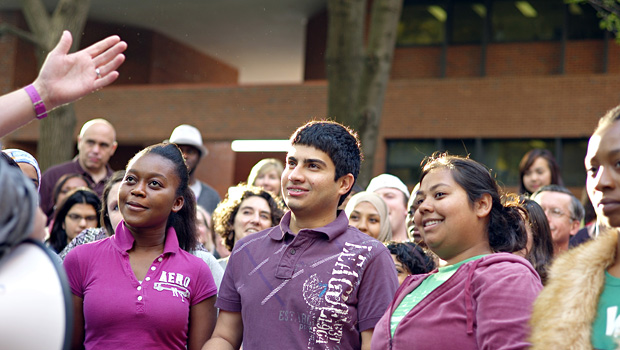 College students from diverse faiths and with a broad range of beliefs gathered in Washington, D.C., recently to attend a White House training aimed at making interfaith cooperation a priority at campuses across the nation. Among them were three Wake Forest students – a Christian, a Jew and a Muslim — who plan to spread the interfaith message throughout campus in the months and years ahead.

The training was hosted by the White House Office of Faith-Based and Neighborhood Partnerships and facilitated by the Interfaith Youth Corp (IFYC) as part of the Better Together campaign, a grassroots movement aimed at making interfaith cooperation and social action a priority at hundreds of U.S. campuses. Only 100 interfaith student leaders were selected to attend each of two sessions held in late October. Representing Wake Forest University were Kolby Knight, Jessica Leuchter and Mojeeb Nazeri.

During the two-day training, the Wake Forest students sat side by side with Christians, Muslims, Jews, Hindus, Buddhists, secular humanists, atheists and agnostics. Together, they learned how to speak out about the importance of interfaith cooperation on college campuses, mobilize their peers to take action and sustain an interfaith movement on campus. In a concurrent training session, campus staff members, including Wake Forest Chaplain Tim Auman, Associate Chaplain for Muslim Life Khalid Griggs and Associate Chaplain and Special Projects Coordinator Chris Towles, learned how to support student leaders in these types of initiatives.

Nazeri, an active member of Wake Forest’s Muslim Student Association and current president of the University’s Interfaith Council, said the training inspired him to engage more students in interfaith work. “During the training, one of our committee members shared her story of being a victim of a hate crime,” Nazeri said. “Stories like hers have inspired us to expand interfaith work on campus and prevent incidents like that from happening to anyone in the future.”

The students also forged friendships with others of different faiths. “We believe that the friendships created in this training session will last a lifetime, and the time we shared with each other will never be forgotten,” said Jessica, who is involved in Hillel, the Wake Forest organization aimed at promoting Jewish life on campus. “Also the environment in which the session was held created this safe haven for people to share stories of inspiration and times when they felt uncomfortable for not being aware of other people’s religious beliefs and views.”

While Knight attended the first session, Leuchter and Nazeri were able to travel together to the second session and cap off the training with an interfaith lunch at Nazeri’s home. His mother made Afghani food which consisted of rice with raisin and carrots, chicken, okra, eggplant and Middle Eastern salad. Says Leuchter: “It was the best meal I had ever had.”

Now that they are back in their daily routine, the students have plans to carry the interfaith message to others. “The rhetoric that consumes the radio and television suggests that our country is increasingly becoming more separated, and unfortunately differences in religion have catalyzed this separation and hurtful rhetoric,” said Knight, a first-year student at the Wake Forest School of Divinity. “I believe that interfaith cooperation is vital to building and sustaining communities. The Interfaith Institute shares this belief, and I hope to work with others at Wake Forest who believe that we are truly better together.”

“In our rapidly changing society, I believe that there is a real need for conferences of this kind,” Auman said. “We live in a world of unprecedented mobility and today Wake Forest students are many times more likely than their predecessors to find themselves meeting people from a variety of religious and spiritual backgrounds. Our ability to sit together, to engage in conversation and to collaborate in the enterprise of identifying shared values can take place at Wake Forest even as we recognize that we adhere to different faith traditions.”