Is your neighborhood killing you? 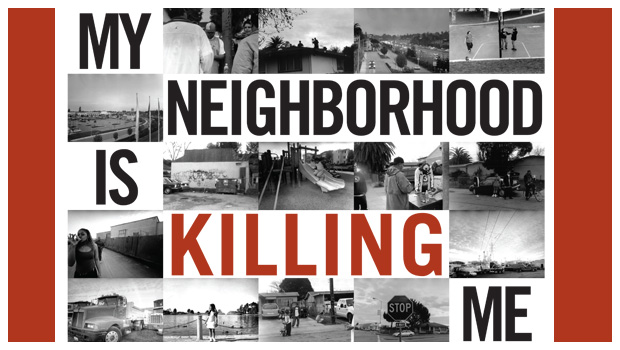 Numerous studies, dating back to the 1970s, reveal that communities with people of color have borne greater health and environmental risk burdens than the society at large. To address the complex issues surrounding environmental injustice, the Office of Multicultural Affairs and the Office of Sustainability are cosponsoring a discussion featuring Bennett College President Julianne Malveaux and Emmy-award winning journalist Simran Sethi.

“My Neighborhood is Killing Me: Environmental Racism and a Call to Justice,” will be held on Thursday, Nov. 11, from 7 to 8:30 p.m. in Carswell Hall’s Annenberg Forum. Provost Jill Tiefenthaler will moderate the discussion. 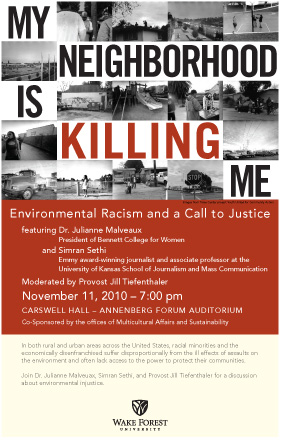 “Many of us are fortunate to live in safe, healthy neighborhoods, but others of us are downwind of factories, downstream of toxic dumping, or in areas without access to fresh and healthy foods,” says Alta Mauro, director of multicultural affairs. “Across the United States, racial minorities and the economically disenfranchised suffer disproportionally from the ill effects of assaults on the environment, and they often lack access to the power to protect their communities.”

Malveaux, a committed activist and civic leader, will address racial issues and challenges to creating safe, healthy communities. Her popular writing has appeared in USA Today, Black Issues in Higher Education, Ms. Magazine, Essence Magazine, and the Progressive. Malveaux’s weekly columns appeared for more than a decade (1990-2003) in newspapers across the country including the Los Angeles Times, the Charlotte Observer, the Detroit Free Press, and the San Francisco Examiner. She has hosted television and radio programs, and appeared widely as a commentator on CNN, BET, PBS, NBC, ABC, Fox News, MSNBC, CNBC, C-SPAN and others.

Sethi, described as an “environmental messenger” by Vanity Fair magazine, is the founding host/writer of Sundance Channel’s environmental programming “The Green” and the creator of the Sundance online series “The Good Fight,” highlighting environmental justice efforts and grassroots activism. She has contributed numerous segments to “Nightly News with Brian Williams,” “The Oprah Winfrey Show,” and the “The Today Show,” and has appeared on cable networks including CNBC and the History Channel.  She is an associate professor at the University of Kansas School of Journalism and Mass Communications.

“Environmental degradation knows no boundaries. An unhealthy environment affects us all,” says Wake Forest Director of Sustainability Dedee DeLongpré Johnston. “We hope this event will raise awareness and encourage people from all communities to take action and address these complex issues.”