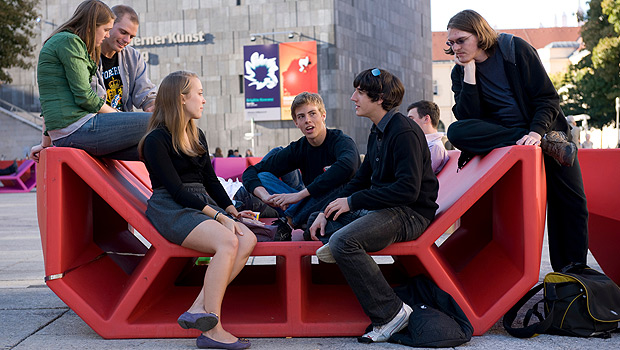 Junior Nick Conte, a history major from Union, W.Va., is spending fall 2010 at Wake Forest’s Flow House in Vienna, Austria. For Conte, who is also a double minor in Italian and international studies, this is his second trip to one of Wake Forest’s international houses—having studied in Casa Artom in Venice his sophomore year. Here he talks about why he chose Vienna as his home away from home this semester.

What made you decide to study at Flow House?

I started learning German my sophomore year, and going abroad to Vienna seemed like the natural thing to do to really learn the language well. I was also very interested in the city’s history.

What has been the most surprising part of your stay in Vienna?

German is not as easy to pick up as Italian. Last year, I studied at Casa Artom in Venice. I was able to learn new words easily because of the similarity of Italian words to English words. But many German words have no connection to modern English terms so there is no base from which to build a recollection of words.

How has your study abroad changed your perspective?

I had lived in Italy previously and thought (ignorantly) that it was the greatest place ever.  But looking at the country from next door has helped me gain perspective on all countries and peoples, not just Italy or Austria.

I’ve gotten to know many housemates very well. We do most things together. We watch movies, and talk over dinner or while cooking. (Eating is a favorite pastime of everyone here.) Our studies bring about in-depth discussions outside the classroom. It’s impossible not to connect in some way to everyone here.

What kinds of classes are you taking?

I’m studying German literature in translation (Goethe, Kafka, Schiller) and German language. I’m also studying Habsburg/Austrian history. The goal in this course is to understand the recent events that have shaped Central and Eastern Europe. In classical music, we study Haydn, Mozart, and Beethoven, who all lived and composed here in Vienna.

How is learning different?

In many ways, classes are similar to studying at Wake Forest. The one major difference is that we can go out and touch history here. We can see the museums and castles that we can only read about in the States. It gives our studies a sense of gravity. Seeing the Kafka museum in Prague was a great example of this because not only did it exemplify Kafka’s life but also the world in which he lived. 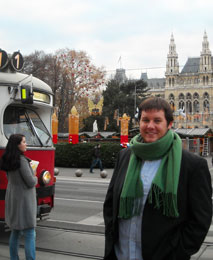 Nick Conte ('12) in front of the Rathaus (City Hall) and one of the local Weinachtsmartks (Christmas markets).

How has the trip broadened your studies as history major?

I knew nothing about the Habsburgs before visiting Vienna. Now that I’ve spent a semester here, the entire course of history throughout Europe makes much more sense. I finally understand why things such as WWI and WWII happened, because I’ve been able to see and learn about the mindset with a firsthand perspective. The history of the Habsburgs is the history of Europe over the past 800 years.

What have you most enjoyed seeing in Vienna?

It’s impossible to go to the center of Vienna, by the Hofburg, and not stand in awe. The part of Vienna that was built between 1848 and 1918 is incredible because it’s a time that we learn very little about in America. All of Europe changed during these seventy years. People truly began to think for themselves and the twilight of the royals became night.

What is the most surprising thing you’ve done during your trip?

I hadn’t planned on running up a mountain. During a weekend in the Alpine town of Mönichkirchen a few of us decided to hike to the top of the mountain Hochwechsel, a 700m elevation change and 9km each way. Normally it takes hikers three hours to reach the top and a little less to get down. Our group managed to reach the top in two hours and fifteen minutes. Unfortunately, hiking a total of 30km in two days pulled my hip flexor and my rugby coach wasn’t too happy about that.

You also studied abroad in Casa Artom. How did the two experiences compare?

The biggest difference is that here in Vienna I don’t have to worry about sinking into the Adriatic. Because I’ve played rugby during my time in Vienna, my sport has helped me make connections with local people. In Venice, we had a professor who also worked at the local university, Ca’Foscari. She was able to introduce us to other students on the island, and that was very helpful. Meeting people, especially locals, can be challenging when living in a Wake Forest house — no matter if it’s Venice or Vienna — because most of the learning and sight-seeing takes place with the group of Wake Forest students who have traveled there together. It’s important to find ways to make connections apart from this group in order to become more at home with the country’s culture.