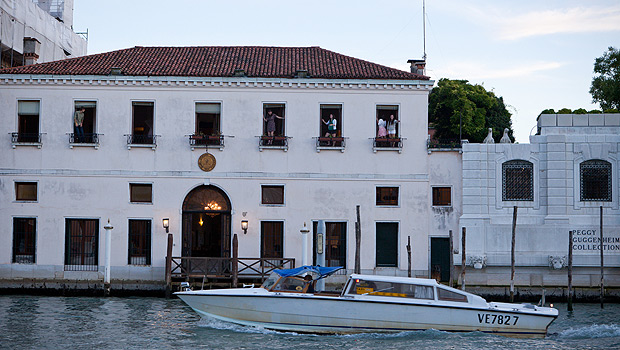 Living and studying together at Wake Forest’s Casa Artom in Venice, Italy, a group of students have backpacked throughout the continent, learned how to cook, and, of course, studied together. Junior Keeley Lawner talks about her experiences. Lawner is a business and enterprise management major with an arts marketing concentration and a Spanish and art history double minor from St. Petersburg, Fla.

What made you decide to study at Casa Artom?

The university’s emphasis on the importance of a study abroad experience was what initially drew me to Wake Forest. I couldn’t pass up the art history and modern Italian film immersion in the fall 2010 Venice program’s curriculum.

Tell us about your classes.

The art history class is typically conducted at local museums or churches. Our group has biked around mainland Venice to study the architecture and art history of the palazzos. We’ve met with local glass-blowers working on the island of Murano. We’re also studying Italian language and literature, post-war Italian film, and the modern Venetian experience — which consists of weekly guest lectures and meetings with Italian university students. Additionally, our group has hosted concerts by inviting local musicians to perform in our parlor on the Grand Canal. Classes are far less conventional than what you would expect on the home campus. Dr. Lubin, our resident faculty member, has aptly compared our time in Venice to a ‘Wagnerian opera,’ describing our classes as simply one facet of our vast learning experience while abroad.

How has study abroad helped you in your major?

Some students are deterred from studying abroad as they rush to fulfill their major requirements. But, as a business and enterprise management major, my business professors emphasized the value of studying abroad. I continually reflect on what I have learned in my classes prior to being abroad and try to apply this knowledge to the ‘real-world’ that surrounds me here in Italy. Living in this historical city and tourist magnet, I am reminded daily of how business permeates society and the impact of marketing and branding on the city.

Has the economic recession affected Venice?

There is definitely a difference between the romantic perceptions of the beautiful historic areas of the city and the economic realities of the 21st century. Venice has lost its ‘city’ status due to a significant decrease in population. Upkeep on the homes on the canals is expensive, so people sometimes walk away and the palazzos deteriorate. This, sadly, is a worldwide economic problem that has devastated many beloved cities.

What was one of you most memorable experiences? 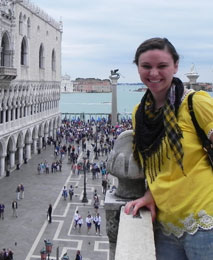 Keeley Lawner ('12) during her semester in Venice.

My favorite Venetian adventure was attending the premiere of the award-winning film at this year’s Venice film festival, Sofia Coppola’s “Somewhere.” September 1 marked the opening day of the 67th Venice Film Festival held on the Lido, which is second only to Cannes. Attending screenings at the festival was thrilling and exhausting. It was like being in L.A. and watching the stars trample the red carpet. We saw a few American films that will not be released in the U.S. until December. We sat a row away from one of the lead judges of the film, not to mention last year’s academy-award-nominated director, Quentin Tarantino, at a premiere of “The Ditch,” a chilling film by Wang Bing based on the labor camps in 1960s China. It was an incredible experience to be a part of this artistic environment after having studied the films that inspired many of these famous modern-day directors

In Casa Artom, where does the group typically socialize?

The kitchen is the hub for housemate bonding as we cook for ourselves almost every day. Dinner preparation is orchestrated such that we rotate suggesting and preparing a menu for all thirteen residents. Our first meal commemorated the first book we read in Italian literature, and we all enjoyed a traditional Sicilian dish featured in Lampedusa’s ‘The Leopard.’ It was a layered eggplant casserole complete with delectable Sicilian pastries from a local bakery. Next week, we will all share a Thanksgiving feast together in our Venetian home.

What other opportunities come with studying in Venice?

Abundant opportunities for travel. I have explored Italy from the Italian Riviera to large cities such as Milan and Rome. I’ve also visited other parts of Western and Eastern Europe that I never thought I would have the opportunity to discover. I have written a blog about my experiences while abroad to connect with friends and family state-side so they could share my experiences.

Do you feel more prepared for life after graduation?

Although I arrived in Venice knowing only a semester’s worth of Italian and equipped solely with an at-a-glance guidebook, I will return to the states a global citizen equipped to succeed in a world that mandates bridging diverse communities, cultures and countries. After having visited and studied the art, economy and history of many of the great cities of Europe, I now realize we must bridge the chasm between diverse cultures in order to better understand and appreciate the world in which we live.