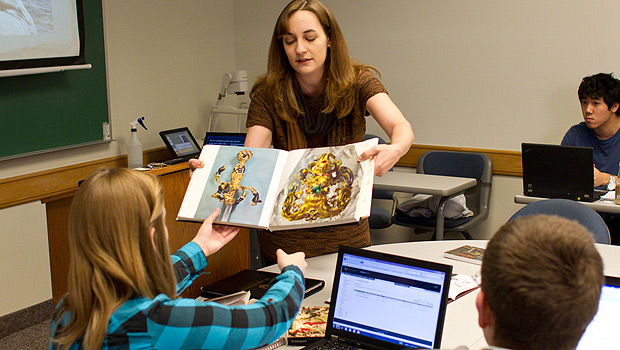 Assistant Professor of German Tina Boyer is helping her students see that, when they step into Harry Potter’s world, they’re stepping into a world influenced by the likes of Beowulf and Norse mythology.

In her first-year seminar “Germanic Myths and Monsters,” Boyer takes her students back hundreds of years to such places as an Anglo-Saxon court where life is harsh, where family and the others close to you are what matters and where bards sing of great battles and heroes.

In this world, Boyer told her students in a recent class that focused on the Volsunga Saga, the hero is “someone who has good intentions and stays true to his word — someone who is not an oath breaker.”

On other days, the students spend time with monsters — the dragons, giants and other creatures created long ago to embody fears, sexuality and taboos.

By the time the semester is done, students will have stopped off to visit the Brothers Grimm and J.R.R. Tolkien on their way to the modern monster and hero — someone who may get the job done but who can’t necessarily be counted on to keep his word.

“You see this breakdown of what a hero is,” Boyer said. “In this new version of the hero, he becomes an unreliable narrator.”

Since starting the class, freshman Timothy Zage finds himself considering characters in light of the duality of good vs. evil.

“In what we have read, it’s difficult to occupy any sort of middle ground between hero and monster, and, though modern depictions attempt to blur the lines, I find myself reaching definite conclusions regarding the issue,” Zage said.  “Heroes today aren’t different than those in Norse times, they are just harder to come by, it seems, in modern literature.”

Rebecca Bruehlman, who plans on becoming a Classics major, chose the course for her first-year seminar because she thought it would be good way to find out about an area of mythology that she is relatively unfamiliar with. She has come to appreciate the ways in which Norse mythology is more overt than Greek mythology in its depiction of the culture’s values.

“These values and ideas seem more blatant and repetitive in Norse mythology to me,” Bruehlman said. “Such as, for instance, honor is a big recurring theme.”

For Boyer — who joined Wake Forest’s German Department last spring — crafting a first-year seminar gave her a chance to highlight her interest in how monsters are depicted in Germanic epics. First-year students choose from a wide variety of seminars that use creative approaches to develop critical thinking skills.

By the time the students finish their final paper, she wants them to see patterns and to have a better understanding of how our monster and heroes got to where they are today.

“I want them to understand why they think the way they think,” Boyer said.