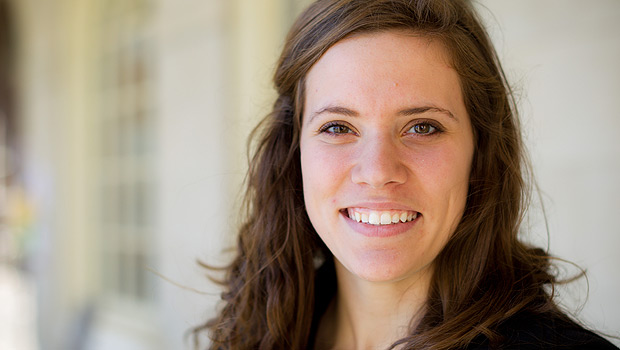 The award recognizes her outstanding contribution in volleyball and her ability to maintain a 3.97 grade point average.

A two-year starting middle hitter for the Demon Deacons, Beck has also been named to both the ACC Volleyball All-Academic Team and the ACC Honor Roll in her first year at Wake Forest. She was named ACC Player of the Week on Sept. 27 after team victories over Clemson and Georgia Tech. She was also named to the Deacon Invitational All-Tournament Team.

“I love that volleyball is a team sport where everyone has to contribute,” Beck says. “You can’t just have one amazing person to win.”

Beck learned about juggling a busy schedule in high school where she participated in volleyball, track, swimming and band. As a biology major and Spanish minor, she continues to work hard to balance her schedule. The team practices four to five times weekly in addition to playing two matches. She also lifts twice a week.

The daughter of two professional musicians, Beck plays the oboe with the University orchestra whenever possible. She joins her teammates in volunteering for community service projects, including D.E.S.K., where they paint desks for local elementary school children, and Project Pumpkin, and visiting Brenner Children’s Hospital. Beck is also an assistant coach for Set Point Volleyball Club, a local juniors program.

“AJ’s contribution to this team on and off the court is endless,” says volleyball head coach Heather Holmes. “Just when you think she has given everything, she continues to give even more. She truly understands the Wake Forest athletics commitment to excellence. And she is one of the most humble, caring and team-oriented players I have ever coached.”

With the First Team Academic All-District selection, Beck will now be considered for Academic All-America honors.