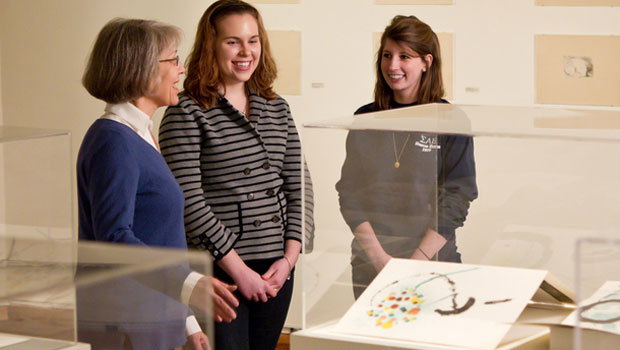 They look closely at the progression of light and dark in the works and discuss the historical context of the prints — choosing those that best tell a short story of three Spanish artists for the Los Sueños exhibition on display in the campus art gallery.

Together with their professor, the students selected a theme for the show, which translates into “the dreams” in English.

With over 400 works from the Wake Forest University Print Collection to choose from, deciding on a theme for the exhibition was critical, says senior Kara Peruccio. “Once we decided on the theme for the show, we were able to focus our efforts, but it didn’t make the decisions on which prints to choose much easier. Our class divided into three groups, and each group was responsible for selecting works for one of the three artists on display. The biggest challenge was working together to make those selections and decide on placement —everyone had his or her own opinion.”

“Laying out the show is one of my favorite parts of the class,” says Barnes. “It’s wonderful to have access to a large collection of exceptional prints for students to work with and study. Many students are drawn to History of Prints just for the opportunity to put together an exhibition.” 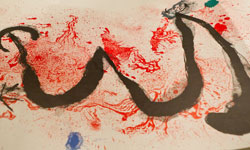 Miró prints are the colorful works on display.

With the exception of the Miró prints, the works on exhibit for Los Sueños are small drawings with tints rather than color. They speak quietly.

“When looking at prints, there’s a richness of detail that requires more than a passing glance,” says Peruccio. “You can look at a print a million times and notice something you haven’t before.”

Barnes and her students hope that people who see the prints will be inspired to learn more about the historical context of the works and the artistic processes involved in printmaking. “There’s a scientific element to the process that is fascinating,” says Barnes. It’s more than making an imprint on paper. It’s a bit magical.”

Los Sueños features original prints by Goya, Miró, and Picasso representing three distinct periods in Spanish art. The works are on display through February 6 at the Charlotte and Philip Hanes Art Gallery along with a separate exhibition of Edward Rice paintings.

Barnes is the author of numerous books and articles. Her most recent book, “Michelangelo in Print: Reproductions as Response in the Sixteenth Century,” (Ashgate Press, Jan. 2010) deals with prints that copy Michelangelo’s work—how they were produced, sold and collected, and how they influenced reactions to his work.