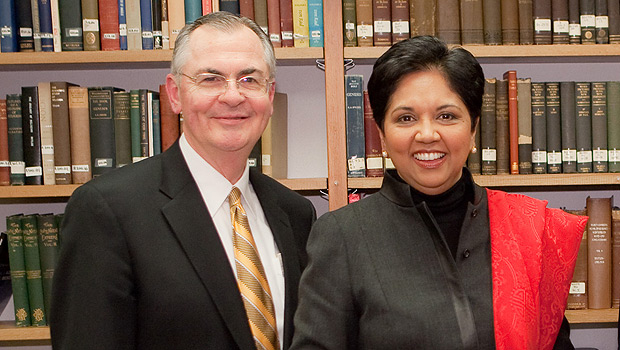 The commencement ceremony will begin at 9 a.m. on Hearn Plaza. The ceremony is reserved for graduates and their guests and is not open to the general public.

“When she visited campus two years ago, Indra wowed students with her insight and energy,” said Wake Forest President Nathan O. Hatch. “She has developed a reputation at PepsiCo for challenging her senior executives even as she reaches out to their families with news and congratulations, making her the perfect speaker as students and their families gather to recognize this landmark occasion.”

In addition to being a member of the PepsiCo Board of Directors, Nooyi also serves on the boards of U.S.-China Business Council, U.S.-India Business Council, The Consumer Goods Forum, Catalyst, Lincoln Center for the Performing Arts, The Peterson Institute for International Economics, Grocery Manufacturers Association and the U.S. Soccer Federation. She is also a Successor Fellow of Yale Corporation and was appointed to the U.S.-India CEO Forum by the Obama Administration.

In a 2009 Time magazine article naming Nooyi one of the world’s most influential people, Starbucks CEO Howard Schultz said: “Her sharp strategic mind, tremendous market insight and humanitarian contributions all combine to make her a rare executive among the global corporate giants.”

Rebecca Chopp, president of Swarthmore College, will deliver the baccalaureate address during commencement weekend at 11 a.m. May 15 in Wait Chapel. The baccalaureate service is a ticketed event open to graduates and their guests.

Before becoming Swarthmore’s president in 2009, Chopp served as president of Colgate University, dean and Titus Street Professor of Theology at Yale Divinity School, and provost and executive vice president for academic affairs at Emory University.

A well-known scholar of religion and American culture, she has authored or edited five books and has published more than 50 articles.   She serves on the boards of the Association of American Colleges and Universities and the National Survey of Student Engagement and is a member of the Presidential Advisory Committee for the NCAA and the Steering Committee of the American College and University Presidents’ Climate Commitment.