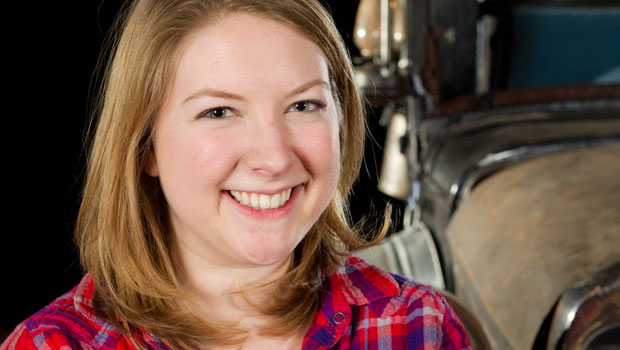 If you visited the Mainstage Theatre during one of the many rehearsals for Grapes of Wrath, you would have found senior Suzanne Spicer with her big book — making sure lighting cues, prop usage, costume changes and the entrances and exits of all the performers have been meticulously noted for every act and scene.

It’s part of Spicer’s work as stage manager, but just part. All of the various technical crews, such as lighting, sound, props and scenery, report directly to her. Before the play begins, she schedules rehearsals and arranges costume fittings. Once the play opens, all her work will have helped avoid any problems that may disrupt the production.

“My job is to make sure everything is in place and in order so the actors can give the best performance possible,” says Spicer, who has stage-managed several Mainstage and student productions at Wake Forest.

In Grapes of Wrath, Spicer says the most challenging part of managing the stage production has been the truck used to carry the Joad family and all their belongings from Oklahoma to California. “It’s a huge piece of scenery that people get in and out of and that also moves around the stage. Making sure the truck moves smoothly so none of the actors fall off and that it is in the right position for every scene is critical.” Ensuring the actors know where to hold on when they’re in the truck, a seemingly small detail, can make the difference between a good performance and a disaster, says Spicer. “If it’s a part of the play, I am responsible for its success.”

As linchpin for the production, Spicer works side by side with the play’s director, Sharon Andrews. “Suzanne is amazing at managing details, organizing and thinking ahead. She solves problems almost before the problems manifest themselves,” says Andrews. “She often makes contributions and suggestions that would normally come from an assistant director, and she is pretty much always right.”

During performances, Spicer, who is a theatre major and music minor, can be found in the light booth where she is calling every light, sound and set changing cue for the play. “She is essentially executing the timing and flow that are crucial to the success of the performance,” says Andrews. “Suzanne is really good at this — as a musician, I think she understands how timing and flow really work.”

Spicer has applied for a number of internships at theaters nationwide in hopes of securing a position after graduation, however, she says she is also interested in events planning. “After all,” she says, “stage managing a play is very much like running an event. It requires planning and attention to detail so that no one will suspect how much work it took to pull it off.”