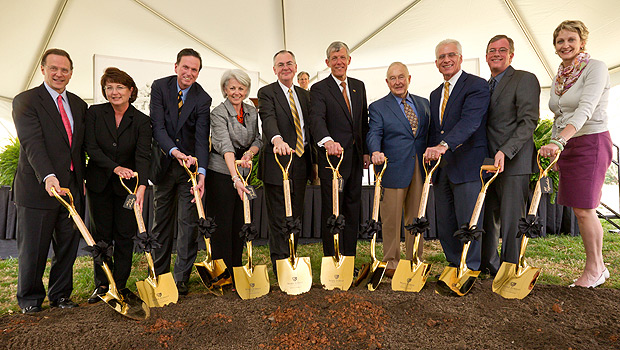 More than 200 faculty, staff, students and guests gathered to celebrate the groundbreaking for Farrell Hall, a new home for the Wake Forest University Schools of Business, at 3 p.m. today at the building site across from Poteat Field, near the Polo Road entrance to campus.

“For the first time in a decade, Wake Forest is breaking ground on a new academic building,” said President Nathan O. Hatch in his remarks.  “Clearly this one is special, because it represents the first ground-up effort to construct space that reflects and supports the teacher-scholar ideal and the distinctive needs and mission of our Schools of Business…. In some ways this is the most important groundbreaking since President Harry Truman turned the soil just across the street in 1951.”

Dean of Business Steve Reinemund began his remarks by sharing the news that Schools of Business students had won the KPMG International Case Competition today.  He then described how Farrell Hall will have the character and personality of Wake Forest and abundant technological resources.

“We are going to put a Georgian wrapper around a modern building,” Reinemund said.

The 120,000 square-foot Farrell Hall, designed to change the nature of business education, will feature sophisticated technology and innovative design to create an environment where faculty-student engagement can thrive. Built around a “living-room” concept that brings faculty and students together in new ways, the building was designed to include flexible classrooms and collaborative spaces, allowing both graduate and undergraduate students the opportunity to learn intimately and intuitively within a shared space.

Honor Thy Father: Mike and Mary Flynn Farrell’s historic gift honors their family’s past and the University’s future. Read more »

Hatch said, “Our goal was to answer the question, ‘What do we want to be in management education and how can we translate this into a physical space?’ This new facility is at once the culmination of Dean Reinemund’s thorough and creative integration of the Schools of Business and the foundation for the promising future of business education at Wake Forest and for our vision for the collegiate university. Mike and Mary are committed to values-based education, which is central to the mission of Wake Forest. We share a joint commitment to quality, personal attention and values.”

Reinemund said, “Farrell Hall will be a world-class home worthy of the exciting future of the Wake Forest Schools of Business. A building does not make a program, but this state-of-the-art facility will provide the platform for inspiring scholarly work and social dynamism.”

Plans for the new building were announced in October, when Mike and Mary Farrell of Summit, N.J., parents of Michael Edward Farrell, a 2010 Wake Forest graduate, made history with their $10 million pledge. It was the largest cash commitment ever by living individuals to the University and the largest commitment to the Schools of Business to date.

Despite the sluggish economy, Farrell sees the push for the new building as timely: “The Empire State Building, the Rockefeller Center – these things were built during the Depression when people didn’t think they were achievable. When people are confused, scared and concerned about direction, you need to send a strong message that we can’t stop thinking about the future. We need to make sure we have the right leaders in place, and places like Wake Forest create those leaders.”

Calling Wake Forest “a unique American institution,” Farrell said, “This is the largest gift we’ve given, and I think, importantly, from the perspective of our family, it is probably the only project we would ever put our name on.”

In naming the building, the Farrells are paying tribute to Mike Farrell’s late father, Michael John Farrell, a maintenance engineer who worked for the New York City Transit Authority.

The three-story building will include a 400-seat auditorium funded by the Broyhill Family Foundation. The Broyhill Auditorium will be home to the Broyhill Leading Out Loud Executive Lecture Series, created to educate and inspire business students through exposure to industry leaders shaping today’s business world. 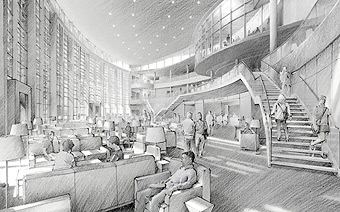 A central 8,200 square-foot Founders Living Room, which Reinemund refers to as the “soul of the Schools of Business,” will provide a collegiate environment to enhance interaction among students, faculty and staff. Adjacent to the Founders Living Room, the Reynolds American Foundation Terrace and Gardens will extend into a naturally wooded area. Students, faculty, staff and visitors will have access to a vibrant open-air space, which complements the overall aesthetics of the building and allows the collaborative space in the building to extend outdoors.

Classrooms will also reflect a flexible, interactive approach and will use a flat-floor design where desks can be easily reconfigured from a lecture-style set up to a style suited to group projects.

The Bern Beatty Colloquium, an innovative space for learning and meeting, will be named for Bern Beatty, a long-time professor of management at Wake Forest. The space is designed for faculty presentations and small lectures.

The majority of the estimated $53 million needed to complete Farrell Hall has already been raised.