Device can heat home, save money 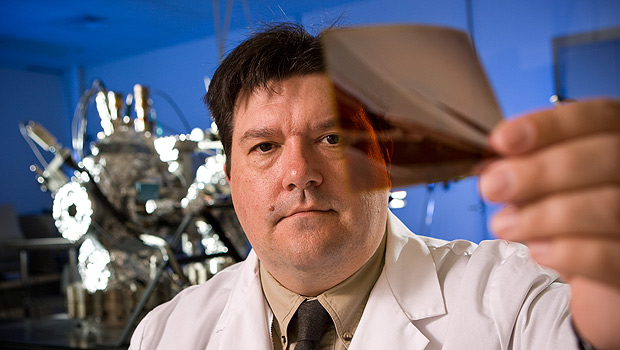 A new polymer-based solar-thermal device is the first to generate power from both heat and visible sunlight – an advance that could shave the cost of heating a home by as much as 40 percent.

“It’s a systems approach to making your home ultra-efficient because the device collects both solar energy and heat,” said David Carroll, Ph.D., director of the Center for Nanotechnology and Molecular Materials at Wake Forest. “Our solar-thermal device takes better advantage of the broad range of power delivered from the sun each day.”

Research showing the effectiveness of the device appears in the March issue of the peer-reviewed journal Solar Energy Materials and Solar Cells.

A standard, rooftop solar cell will miss about 75 percent of the energy provided by the sun at any given time because it can’t collect the longest wavelengths of light – infrared heat. Such cells miss an even greater amount of the available daily solar power because they collect sunlight most efficiently between 10 a.m. and 2 p.m.

“On a rooftop, you have a lot of visible sunlight and heat from the infrared radiation,” Carroll said. “The solar-cell industry has for the most part ignored the heat.”

The design of the new solar-thermal device takes advantage of this heat through an integrated array of clear tubes, five millimeters in diameter. They lie flat, and an oil blended with a proprietary dye flows through them. The visible sunlight shines into the clear tube and the oil inside, and is converted to electricity by a spray-on polymer photovoltaic on the back of the tubes. This process superheats the oil, which would then flow into the heat pump, for example, to transfer the heat inside a home.

Unlike the flat solar cells used today, the curve of the tubes inside the new device allows for the collection of both visible light and infrared heat from nearly sunrise to sunset. This means it provides power for a much greater part of the day than does a normal solar cell.

Because of the general structure and the ability to capture light at oblique angles, this is also the first solar-thermal device that can be truly building-integrated – it can be made to look nearly identical to roofing tiles used today.

Tests of the solar-thermal device have shown 30 percent efficiency in converting solar energy to power. By comparison, a standard solar cell with a polymer absorber has shown no greater than 8 percent conversion efficiency.

The research team will build the first square-meter-size solar-thermal cell this summer, a key step in getting the technology ready for market.