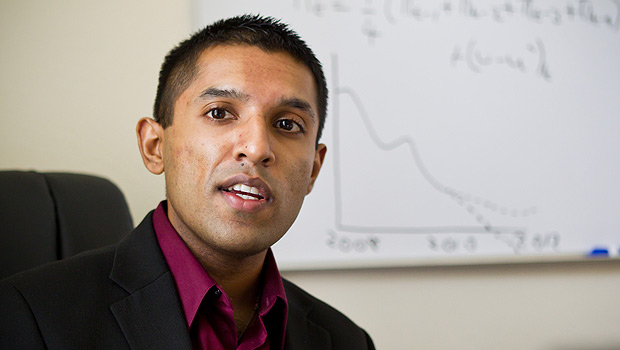 Rising food and gas prices make consumers worry about inflation, but Assistant Professor of Economics Sandeep Mazumder says they should be more concerned about deflation.  Mazumder, who studies macroeconomics, explains how low rates of inflation can actually give the U.S. economy a boost.  He argues that traditional economic models of inflation predict little-to-no growth in the inflation rate for 2011-2013.  He recently made a presentation at the Brookings Institution to economists examining inflation in the recent recession and making predictions for whether deflation is on the horizon.  He received positive feedback on his work from Federal Reserve staff, International Monetary Fund economists, and Council of Economic Advisers members.

Q. Concerns about inflation seem to be growing.  Is this fear justified?  Can inflation be a good thing?

A.  Increases in some prices, such as gas, do not mean the sky is falling.  Since the 1990s, research shows that U.S. inflation has not been as responsive to oil shocks as it was in the 1960s, 70s and 80s.  I think people fear rising gas prices are a sign of higher inflation mainly because gas prices are the only prices that are visibly and publicly displayed! Typically macroeconomists focus on “core” inflation rates, which excludes food and energy prices. This essentially gives us an idea of the long-term underlying trend of inflation, rather than transitory changes in inflation. Typically we think total (also called “headline”) inflation should converge to core inflation, and changes in things such as gas prices are often just temporary price changes and not necessarily reflective of the underlying trend.

A low, stable inflation rate can be a good thing as it allows the labor market to cut real wages during a recession. It is very difficult for an employer to cut wages, since who wants their wages to be cut? But a wage freeze combined with a positive inflation rate amounts to a cut in the real wage (which is: how much can I buy with my wages), which is often necessary during a recession to allow the labor market to clear. Thus, some inflation can be good (especially if it is in line with inflation expectations).

Q.  Why is deflation or falling prices for goods and services a greater danger for Americans than inflation?

A. Deflation is very dangerous for three main reasons: (1) it makes people spend less. Suppose I am in the market to buy a car and a choose a car that is priced at $20,000 in 2011. Due to deflation that car will be priced at $15,000 in 2012, and $10,000 in 2013. So why should I buy the car in 2011? I should wait, and allow the purchasing power of my money to grow as prices fall. If this happens economy-wide, then spending is severely cut back which will likely lead to a recession. (2) Debtors are worse off when there is deflation since their debts are more valuable in real terms when prices fall. (3) Real wages actually rise when there is deflation; meaning employers are paying workers more in terms of purchasing power. This could lead to layoffs if production doesn’t match the level of the real wage rate being paid.

Q. How much impact does the U.S. have on oil prices?

A. Consumers in the U.S. have very little impact on oil prices. On the supply side, the oil producing nations in the Middle East directly control what oil prices are by their production of oil. Events such as wars or civil unrest in Middle Eastern countries will only serve to reduce the supply of oil and thus increase oil prices. On the demand side, recent research has shown that in the next 10-20 years China will predominantly determine the price of oil. China is a huge developing country, and their demand for oil has been growing rapidly. Their demand for oil could grow to be so high that it far outweighs the U.S. demand for oil, meaning that the price we pay for gas could largely depend on how much oil China is buying.  This clearly does give us reasons to invest in cost-efficient alternative sources of fuel, as well as exploring the possibilities of drilling more of our own oil. Lastly, there has been increasing speculation on oil futures in recent months, which also has led to rises in gas prices. Speculators are betting that oil prices will rise in the future, which indirectly affects the prices we pay at the pump. Gas stations usually work on a system where they must raise the funds for the next shipment of gasoline from the sale of its previous shipment. Thus gas stations think that future shipments will be priced higher and therefore they must charge more for the existing supply of gas that they have in order to raise enough funds to pay for their future shipment of gasoline.

Q. How will budget decisions in Congress affect the economy? What are the key questions going forward?

A.  The standard textbook answer to the recent budget cuts is that they will have a downward impact on inflation. That means inflation should be reduced. But, there are two key questions that we need to consider alongside this: will the private sector make up for the cuts in government spending and what will happen to unemployment. If the unemployment rate falls, this will offset the impact of the budget cuts on inflation. This might mean that the recent budget decisions may not have too big of an impact on the inflation rate.

Q. What is the single most important factor to watch as an indicator for what will happen in the economy?

A.  Whether or not unemployment starts to decrease in the next year or two will almost certainly be the key macroeconomic indicator for our economy. Also, whether inflation expectations remained anchored at 2 percent or possibly become de-anchored to a lower level will potentially be very important for our economy.

Q. Is the Great Recession over?

A. The National Bureau of Economic Research business cycle dating committee has officially said it’s over, but I wouldn’t say we are out of the woods until we see unemployment rates fall to more “normal” levels.