The lessons of Vietnam literature 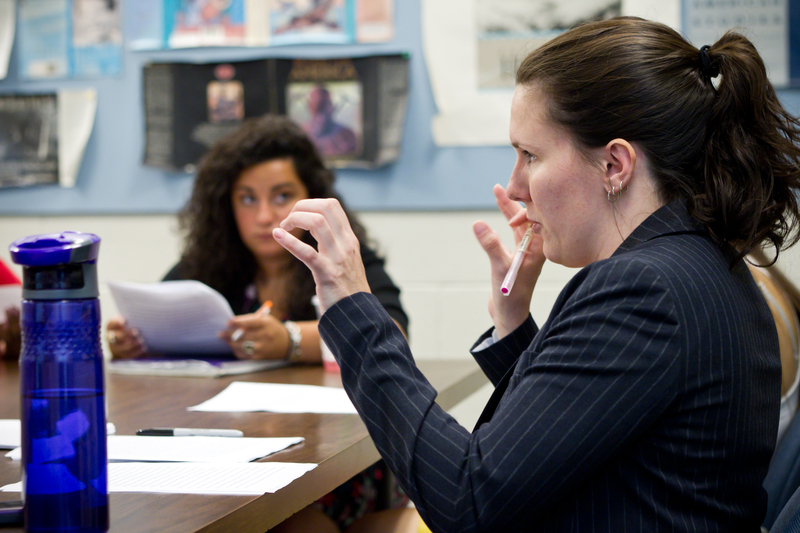 Students in Kathleen McClancy’s first-year seminar class are completing their semester-long study of “The Vietnam Experience” this week, nearly 36 years to the day since the Vietnam War ended.

Since Wake Forest alumnus Graham Martin (’32), the last American Ambassador to South Vietnam, fled on one of the last helicopters to leave Saigon before North Vietnamese troops entered the city on April 30, 1975, thousands of books have been written about the conflict.

McClancy’s writing composition class isn’t focused on the historical aspects of the war, but on how books and films created the Vietnam mystique and the sway the war still holds over Americans. “What we think we know about the war comes as much from books as from the war itself,” said McClancy, a visiting assistant professor of English whose specialty is post-1945 American fiction.

Her students have studied some of the iconic books about the war, including Philip Caputo’s “A Rumor of War” and Michael Herr’s “Dispatches,” and films such as “Platoon” and “The Green Berets,” to learn how to think critically about literature and to turn a critical eye to their own writing. “This is a writing class, so I hope students have learned how to identify rhetorical strategies and how to use them in their own writing,” she said.

McClancy, who was born the same year Saigon fell, became “obsessed” with the war growing up in the 1980s when TV shows such as “Simon & Simon” and “Magnum, P.I.” often featured Vietnam veterans as characters. “I became interested in the different manifestations of veterans and how the war influenced the political and cultural dialogue of the 1980s,” she recalled.

She graduated from Yale University and received her master’s degree and Ph.D. from Duke University; her dissertation was on representations of the Vietnam War in popular culture. Even today, phrases such as “no more Vietnams,” “cut and run” and the “domino effect” still figure prominently in debates about the wars in Iraq and Afghanistan, she said.

Because of the symbolism attached to Vietnam, the televised nature of the war, and the often-conflicting themes and ideals associated with the war, it provides a rich trove of material for a writing seminar, she said. “It is such a good example of how ‘true history’ is made, and not born — it shows very clearly how knowledge that we perceive as ‘true’ has at least some basis in fiction, and specifically in Fiction, such as literature and film,” she said.

McClancy’s students have also read Bobbie Ann Mason’s “In Country” and Tim O’Brien’s “The Things They Carried,” as well as excerpts from Richard Nixon’s “No More Vietnams” and Jan Scruggs’ “To Heal a Nation.” They also watched “Tet!,” a 1985 documentary on the Vietnam War hosted by Walter Cronkite, and “Black Hawk Down,” the 2001 film directed by Ridley Scott, to discuss comparisons between Vietnam and America’s involvement in Somalia. She also teaches a class on the literature of the Cold War, which she calls “Atomic Asylum.”

Most of what her students knew previously about the Vietnam War tended to be stereotypical stories picked up from movies that they accepted as fact, said McClancy, who also has an interest in media studies. “The war can be a very useful axis for considerations both of what creates narrative and how those narratives become accepted, and for discovering what methods of persuasion are most successful — why, for instance, “The Green Berets” fails to leave its mark on history, but “Apocalypse Now” is taken as accurate.”