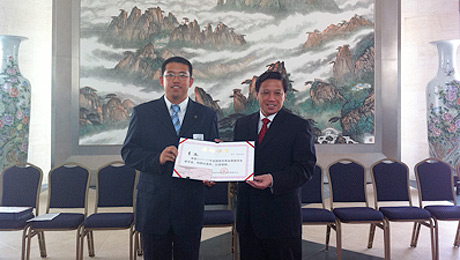 Granted across all fields of study, the award was founded by the Chinese government in 2003 to reward the academic excellence of self-financed Chinese students studying overseas. Only those with outstanding performance in Ph.D. studies are considered by the award selection panel.

Yuan Li’s research focuses on fiber solar cells, a new kind of photovoltaics for which Wake Forest has received a patent this year.

He was among 146 Chinese students in the United States to receive this year’s award. Chinese Ambassador Yesui Zhang presented the award at a ceremony held at the Chinese Embassy in Washington D.C. earlier in June.

Yuan Li is the first Wake Forest student to win the award.