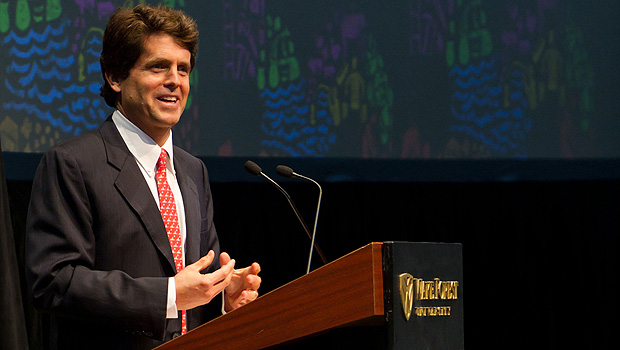 Mark Kennedy Shriver opened his Voices of Our Time lecture Thursday with positive energy, a powerful voice, a passion for service and a sense of humor. Referencing his cousin Robert Kennedy Jr.’s upcoming visit, Shriver said he was especially honored to be speaking at Wake Forest: “I’m from a very competitive family, and the fact that I’m here before Bobby really made me happy.”

Shriver, who serves as senior vice president of the U.S. programs of Save the Children, proved to be a charismatic speaker, as he discussed the Peace Corps, founded by his father, Sargent Shriver, in 1961 under a charge from President John F. Kennedy that dates back to his inauguration speech.

Although Mark Shriver called the Peace Corps the most enduring legacy of the Kennedy presidency, he also referenced a time that the program faced adversity. As the program was beginning, the Wall Street Journal called the idea of the Peace Corps “nonsensical,” and former president Dwight D. Eisenhower labeled it a “juvenile experiment.” But a clip played from Shriver’s documentary about his father’s life, American Idealist, showing Sargent Shriver facing the adversity in stride. It was a bittersweet moment, as Sargent Shriver passed away this year.

Shriver commended Wake Forest on having more than 200 students, faculty and alumni serve in the Peace Corps since the program’s inception, averaging roughly four volunteers per year. That connection is celebrated with several events during Homecoming and beyond (see box).

“Compassion in service can shatter barriers,” Shriver said as he urged the audience to consider the importance of service and called into question policy that surrounds the Peace Corps. Shriver noted President Barack Obama promised during his campaign to double the size of the organization, and questioned why America spends more money on the U.S. Army’s marching band than the Peace Corps each year.

“If they mean to have peace, let it begin here,” Shriver declared, ending with, “It will be the servants that save us all.”