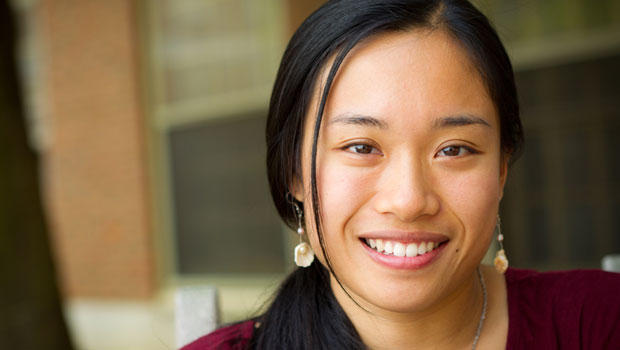 Senior Amy Liang is one of 20 students statewide to receive the Community Impact Student Award and a certificate of appreciation from Governor Bev Perdue for her work to combat hunger and homelessness. The award recognizes her volunteer efforts and her ability to inspire others to get involved.

A biology major and sociology minor from Kingsport, Tenn., Liang has participated in a variety of community service efforts, several of which focus on reducing food insecurity in Winston-Salem.

A member of Wake Forest University’s Volunteer Service Corps, Liang volunteers with Campus Kitchen, which uses cooked, but never served, food from campus cafeterias, campus-raised organic produce and donations collected from partnerships with local grocery stores to create meals for those in need in the community.

She is also a lead volunteer for the student outreach program, Wake Saturdays, which serves meals to the hungry in downtown Winston-Salem near Samaritan Ministries.

Last year, Liang interviewed local homeless men and women in area shelters to create a documentary to raise awareness of hunger and homelessness in Winston-Salem, an area with the third highest food hardship rate in the country.

Turkeypalooza begins Friday, Nov. 11th at 6:30 p.m. and is part of Hunger and Homlessness Week. Campus Compact Conference attendees from across the state of North Carolina and Wake Forest volunteers will be sorting food in preparation for the week of cooking ahead. Students will be delivering and serving Thanksgiving meals and food baskets to area organizations from Nov. 13-18.

With a University-awarded research grant, she spent the summer working to untangle the links between homelessness, diet and diabetes. Liang says she hopes her findings will lead to changes in the way shelters address the needs of the diabetic homeless, including improved food options and providing appropriate storage for insulin.

“I spent several nights in the local shelters to learn more about the needs of the homeless,” says Liang. “When I first started my work I was concerned about the socioeconomic and racial barriers that exist between myself as a volunteer and the people I work with. Yes, these barriers exist, but they are easily broken down. I am surprised how many at the shelter are not only willing to work with me, but also curious about my life and concerned about my future. It is very humbling.”

“Amy has a stellar intellect and an astute social consciousness,” says sociology professor Saylor Breckenridge, who has been working with Liang on her research.  “Her volunteer work at homeless shelters in Winston-Salem has become embedded in her research, which is both scientifically engaging and has the ability to produce positive impacts on the lives and livelihoods of individuals and society at large.”

This semester, Liang is also volunteering at Forsyth Medical Center in the Elder Life Program, a new patient-centered program for those 70 and older. “Unlike most other administrative volunteer work in hospitals, I engage in activities with the patients designed to help delay the onset of dementia. I hear stories from people who have lived amazing lives, and that’s an incredible experience,” Liang says.

Liang will receive her award on Saturday, Nov.12, during the North Carolina Campus Compact Conference, which is celebrating its 10th anniversary at Wake Forest this weekend. Student, faculty and staff volunteers from across the state will be meeting to discuss ways to improve campus community outreach. Liang will present her summer research findings, “Linkages Between Homelessness, Diabetes and Diet,” on Sunday, Nov. 13.