Brandon Turner, a Wake Forest senior who studies biophysics and plays rugby, has been named a Rhodes Scholar. Turner, who is from Fontana, Calif., conducts research on the molecular structure of proteins.

He is among 32 Americans chosen by the Rhodes Trust Nov. 19 to study at England’s Oxford University in 2012 as Rhodes Scholars. At Oxford, he plans to pursue a Master of Science degree in global health science and then a master’s degree in public health.

At Wake Forest, he is majoring in biophysics with a minor in sociology. 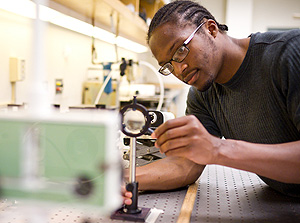 “Receiving this honor has been an amazing experience,” Turner said. “I truly believe that this is as much a testament to the support and mentoring I’ve received at Wake Forest, and my family, as anything else.”

He is the 12th Wake Forest student to be named a Rhodes Scholar in the past 25 years.

“I hope to use these skills to study the growth of chronic diseases (perhaps diabetes and cancer) in developing countries,” Turner said. “I want to analyze and design effective interventions that will hopefully address this growing problem, with particular emphasis on physical activity, nutrition, and sanitation. However, I also want to be active in advocating for policies that will address health inequalities and chronic diseases.”

At Wake Forest, Turner holds the Carswell Scholarship. He combines biological, biochemical and computational knowledge to analyze proteins to aid in the discovery of new drugs. He was awarded the 2010-2011 American Physical Society Scholarship for Minority Undergraduate Physics Majors. 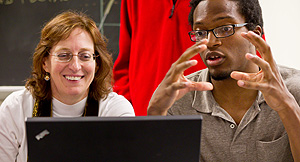 Turner also has a strong commitment to community service. He spent a summer building computer labs and establishing a computer literacy education program in Cameroon. He regularly volunteers at Samaritan Inn, a homeless shelter in Winston-Salem.

“Brandon has an unusual balance of quantitative gifts and humanitarian spirit,” said Tom Phillips, director of the Wake Forest Scholars program.  “He is fearless, whether attacking biophysical computer imaging or speaking at international science conferences or racing with a rugby ball.”