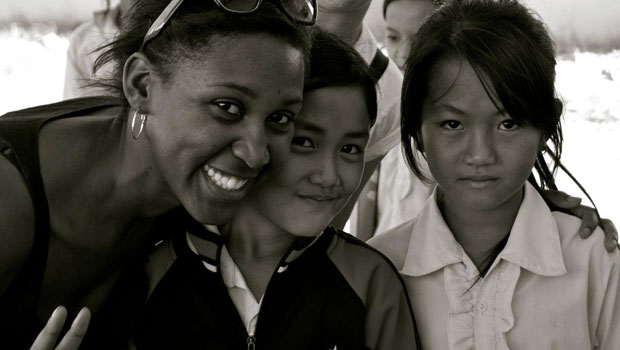 For months I had been preparing for my two-week service trip to Vietnam. Service was part of my spring semester study abroad in Dakar, Senegal, in 2011, and I knew I wanted to serve the international community again. I chose Vietnam because it was a country I knew very little about, and I wanted to learn more.

My group, which consisted of 10 other Wake Forest students, one staff advisor, and myself, met weekly during the fall semester to prepare for this excursion. We researched topics about Vietnamese culture, cuisine and history, but there was still no way to be prepared for the amazing experience that we were lucky enough to have.

At 7 a.m. on Jan. 1, 2012, I left Charlotte, N.C. Thirty-two hours later I arrived in Ho Chi Minh City, the former capital of South Vietnam. Although the flight was long and taxing, my excitement was not harnessed by my exhaustion. The next day, our group met Vietnamese university students with whom we would work to complete two houses in a small village in the south. Many of my peers, myself included, had never built a house before. It is still hard for me to fathom that we finished the foundation, tiled floors, painted, and furnished these homes. It was hard work made easier with the help of the locals and the occasional breaks that meant playtime with the village children.

A short drive from the Cambodian border, the Phu My village was one of the poorest in the country. The homes we built were cement, but most of the other houses were thatched straw huts. Access to clean water is limited and the area is susceptible to floods. Still, the community is home to some of the nicest people I have met. Their gratitude and hospitality is unmatched in my book. So often people get obsessed with making comparisons about different cultures, always looking to find how ‘we’ do things differently than ‘them;’ however, my travels have led me to believe that we are more alike than not alike.

When I left for Vietnam I was prepared to learn more about a country with such a rich history and culture. I was surprised to learn more about my own culture through his trip. For example, in America, I think we often times have the inability to stand still. There is this constant longing to have more; whether that be material things like clothes, or even more work experiences. I think we live in a society where it is hard to be satisfied because satisfaction is often linked to complacency. That was not the case with the Vietnamese people I met.

As another year begins, it is easy to make resolutions, to tell myself I am going to do something differently. It is much harder to do it.  My trip has inspired me to act. According to the Vietnamese, this year is the year of the dragon, a year of luck and fortune. I am already off to a great start.