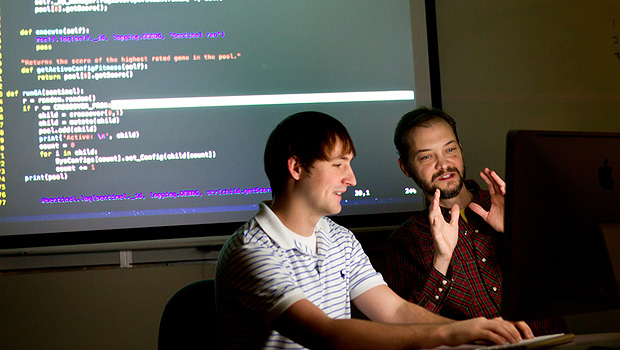 Computer science graduate student Michael Crouse (BS ’10, MS ’12) spends just as much time thinking about biology as he does technology these days.

Crouse and his faculty mentor, Associate Professor Errin Fulp, apply biological design principles to develop innovative ways of thinking and address modern-day challenges. When addressing the ever-changing and growing concern of cyber security, nature is their blueprint and biology is their inspiration.

Now they are fighting the continual evolution of viruses, worms and malware with evolution. Together, they are developing the first-ever automated computer configurations that adjust as quickly as the threats.

In refining a genetically inspired algorithm that proactively discovers more secure computer configurations, they are leveraging the concept of “survival of the fittest.” Early simulations have shown the increased diversity of each device’s configuration improves overall network safety, without putting undue stress on IT professionals.

“Typically, administrators configure hundreds and sometimes thousands of machines the same way, meaning a virus that infects one could affect any computer on the same network,” says Crouse, who recently was named one of the “nation’s top new inventors” by Inventor’s Digest magazine. “If successful, automating the ability to ward off attacks could play a crucial role in protecting highly sensitive data within large organizations.”

Bill Conner, David and Lelia Farr Professor of Innovation, Creativity and Entrepreneurship, teaches “Bio-inspiration and Biomimetics” as an interdisciplinary entrepreneurship and biology course. The course applies biological methods and systems to the study and design of new products and services – from ideation to business plan development.

“A classic example was the creation of Velcro, but there are so many other ways nature can be used to inspire new products. For example, scientists are studying the way geckos walk on walls to create new adhesion technologies, and they are using animals as robotic models,” Conner explains.

Glenn A. Fink, a Senior Research Scientist in PNNL’s Secure Cyber Systems group says the rigorous scientific approach Fulp and Crouse have taken to improve cyber security is impressive. He adds, “A liberal arts education, such as Wake offers, attracts students who are good at thinking outside the technology box and produces minds that are good at dealing with the ambiguities of new approaches.”

Cyber attacks usually take place in two phases, says Fulp. In the reconnaissance phase, a virus or other threat simply observes the landscape, identifies possible defense mechanisms and looks for the best way in. If nothing has changed since the reconnaissance phase upon return, the virus strikes. But security experts say even the slightest change in environment can make a huge difference in deterring a potential attacker.

“Just as one might try to prevent a home robbery, our goal is to create a ‘moving target defense’ that detects cyber threats when they first case the house,” explains Fulp. “If we can automatically change the landscape by adding the technological equivalent of security cameras or additional lighting, the resulting uncertainty will lower the risk of attack.”

Over the next few months, the team will test its work to transform cyber security. Planned assessment includes integrating the automated system into the computer science department’s annual “hackathon,” giving budding developers the opportunity to improve the system and contribute to its promising outlook.

Though no one has successfully modeled this complex process before, this is not the first time Fulp and Crouse have used nature as their guide.

Using genetic algorithms for computer configuration adaptation is part of PNNL’s Bio-Inspired Approaches to Moving Target Defense Strategies. In a separate, ongoing cyber security project with PNNL, Fulp and Crouse are training an army of “digital ants” to turn loose into the nation’s power grid to seek out computer viruses trying to wreak havoc on the system. The digital ants technology mimics the way ants think, use scent trails and swarm in nature to detect and prevent cyber attacks.

Fulp is also currently leading a group of Wake Forest faculty in creating an academic center dedicated to the study and teaching of bio-inspiration and biomimicry, a discipline that applies nature’s design principles to develop innovative new ways of thinking.

“Increasingly, conventional solutions are unable to scale to the information or processing required by the massive influx of data. Furthermore, the complexity of many computer systems will necessitate solutions that are more scalable, robust, and flexible than traditional methods can offer,” says Fulp. “Designs found in nature can serve as a source of inspiration, providing robust and efficient methods that are better suited to address these complex problems.”