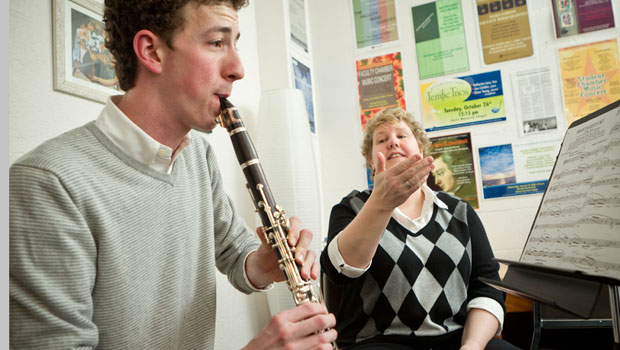 Eleven vocalists, seven woodwind players, five pianists and four string players will compete in the 35th Annual Giles-Harris Competitions in Musical Performance on February 18. Jacob Eichhorn is one of these 27 students.

This is the fourth time Eichhorn, a senior music major from Greensboro, N.C., will participate in the Giles-Harris competitions. Having chosen the first movement of Robert Schumann’s “Fantasiestucke” for his clarinet solo, he says the biggest challenge he will face on stage this year is communicating the emotional intent of the music without becoming too focused on technique.

Competitors perform their pieces from memorization. The judges will have copies of the scores. Unlike pianists and vocalists who often perform from memory, woodwind players are less likely to play without sheet music. But Eichhorn’s music professor, Eileen Young, says he has a talent for memorizing scores and music patterns.

“It might come from my listening to classical music as a child,” says Eichhorn. “At around four or five years old, Mozart or some other composer would be playing, and I would keep pressing the rewind button again and again whenever a part of the piece caught my interest.” Hours of practicing and a genetic ear for music — both of Eichhorn’s parents are musicians — also help.

“I tell my students, no matter what happens, keep playing,” says Young. “One year a student left the stage in tears because she had forgotten the middle section of her piece, but the judges selected her as a winner. Something about her performance made her stand out.”

Young has shepherded at least 20 students through the competition during her 12 years at Wake Forest and has had 10 prize-winning musicians under her tutelage. (Eichhorn has won twice during his three previous competitions.) She teaches clarinet and saxophone, and leads the woodwind ensembles at the University.

Students are judged on accuracy, stage presence and physicality. Young says Eichhorn’s expressive playing style will likely help him this year since the theme for the competition is music in the romantic style.

A double major in music and English, Eichhorn says whether he is tapping the keys on his clarinet or computer, he has “learned how to be self-disciplined through the challenging times.” After graduation, he hopes to either teach English abroad or join Teach for America before heading to graduate school to continue his English studies. “I will always be a musician, but I also want to pursue other interests,” he adds.

“Part of my role as teacher is to help students figure out what they want to do with music,” says Young. “I help them improve their technique and their sight reading skills, but I also help them think about ways to combine their interest in music with their other long-term goals.”

Wake Forest students enrolled in individual instruction on any instrument or voice type are eligible to enter the Giles-Harris competitions, with their instructor’s permission. Judges selected from outside the University recognize seven students and award more than $3,000 in donor-funded prize money.