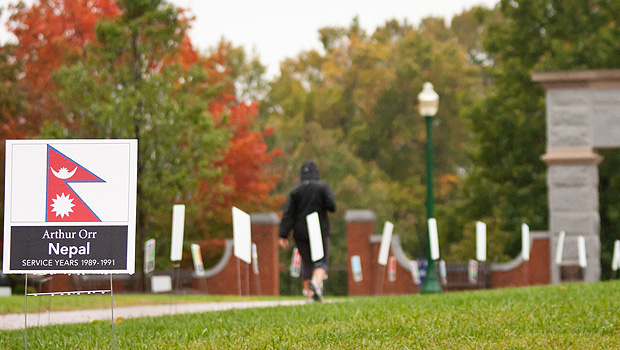 “The Peace Corps is actively and successfully engaged in 76 countries,” said Aaron S. Williams, Peace Corps director in a letter to the school, “and our successes, both this year and during the last five decades, are directly attributable to the outstanding support we have received from Wake Forest University.”

Today, 17 of Wake Forest’s undergraduate alumni and three graduate alumni are serving abroad as Peace Corps volunteers. Wake Forest has sent more than 200 students, faculty, staff and alumni to help with grass-roots projects in agriculture, education, the environment, health and HIV/AIDS education and prevention as well as small business development since 1961.

In October, Wake Forest celebrated its long tradition and the 50th anniversary of the Peace Corps with special Voices of Our Time guest Mark Kennedy Shriver, who spoke on American volunteering, a special exhibit of memorabilia from past volunteers and a panel discussion during homecoming weekend.