The making of student entrepreneurs 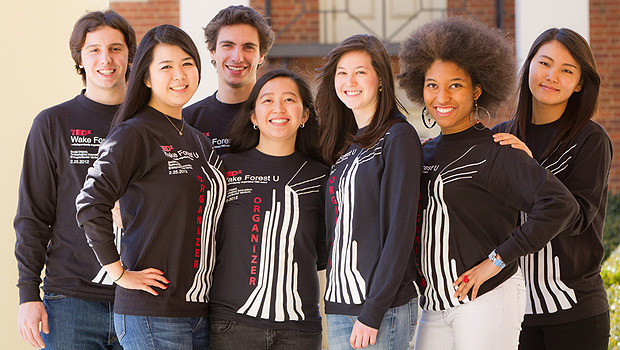 For many students at Wake Forest, the road to an entrepreneurial outlook runs through Professor Lynn Book’s class on creativity and innovation, the foundational course for the interdisciplinary minor Entrepreneurship and Social Enterprise. Lucy Lan, who with six other students organized this weekend’s TEDx conference, is one of those students.

“I took Creativity and Innovation with Lynn Book last spring,” said Lan. “That’s why I asked her to be a TEDx speaker. Professor Book encouraged us to think outside-of-the-box, to ponder creative solutions beyond our immediate capabilities.”

TED, which stands for Technology, Entertainment and Design, is the acronym for an international nonprofit devoted to “ideas worth spreading.”  Through the resources TED distributes on its website, students in Book’s course encounter a panorama of social ventures, inventions, and creative ideas realized through entrepreneurial skills.

“I will be talking about creativity as the number one, critical competency for the 21st Century,” said Book of her TEDx talk.  “Creativity drives innovation, develops and trains the imagination, and cultivates a human scale, ethics based view of the world.”

How has Book’s “Creativity and Innovation” course cultivated creativity, entrepreneurial boldness, and a passion to make the world a better place?

“I designed and developed this course – one of the first in the nation – as a gateway course for the minor in Entrepreneurship and Social Enterprise at Wake Forest,” said Book, who is Associate Director of the Program for Innovation, Creativity and Entrepreneurship. “Each semester it varies because of the evolving nature of the field of creativity studies and because I adjust it to the composite of students from majors across the liberal arts spectrum.”

The semester-long course is roughly divided into 3 phases, with a focus on the internal creative process first. The second phase is more externally focused, exploring innovation, design thinking and other forms of extrinsic creativity. This phase culminates in an exhibit of “Everyday Innovations” for which the students create prototypes of their inventions. In the fall semester, the exhibit coincides with Global Entrepreneurship Week. This spring, Book designed the course to coincide with the TEDx conference. “Students will be developing   investigations that spring from ideas presented at TEDx,” she said.

“My initial inspiration came from NASCAR,” said Taylor of her tiny track.  “I have two uncles who love NASCAR and who watch a lot of racing. Watching the cars made me think of all the energy they were consuming. Then I thought, ‘what if instead of consuming energy the racing cars could generate energy that we could capture for other uses.’”

Seniors Max Jacobs and Olivia Kohari adopted the same concept, but applied it to designing entire playgrounds that could produce energy.

Junior Jharrison Gillespie, who plays football for Wake, designed the “handless umbrella.” It can be worn like a backpack and fends off the rain when one’s hands are otherwise engaged, for instance, with crutches.

After observing what their classmates have produced for the Everyday Innovations Exhibit, the students form teams for their final projects.  “The students self-select their teams based on like ideas, opposite ideas, hybrid combination possibilities from their prototypes, or particular style or approach to design thinking,” explains Book. “So a ‘systems’ person who thinks strategically might want to collaborate with a ‘design-build’ kind of person. “

The last phase catalyzes the students to think more about translation and application in the world whether through entrepreneurial venture development or some other entrepreneurial, collaborative or in-the-world engagement.

Juniors Jonathan Williams and Hannah Moredock teamed up to make a better beekeeper’s suit for their final project. The idea was sparked by a class visit to an urban farm venture.

“The purpose was to build a better bee suit,” explained Williams, “one that would be cheaper to produce and perhaps more effective at reducing the stinging that the beekeeper experiences.

“There was a sophisticated simplicity to the beekeeping process that was attractive to us,” said Williams. “A single person can oversee the production of honey and other bee related products and that sense of autonomy was monumental. Using our creativity techniques we were able to innovate on the bee suit, a necessity for any beekeeper, to make this autonomy more accessible to the beekeeper.”

“If there is one major take away point from this class,” concluded junior Cory Ryan, it is that creativity should not be treated as an end in and of itself but rather as the foundation of a new way of thinking. A critically creative approach opens doors to new ways of thinking.”

Follow these links for more entrepreneurial ventures launched by current undergraduates and graduates who have been shaped by Innovation, Creativity, and Entrepreneurship Program.  Or check out the student blog for “Creativity and Innovation.”