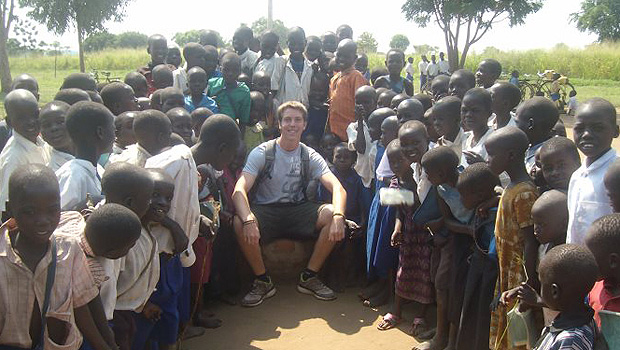 DeKoninck, a senior political science major at Wake Forest University from North Manchester, Ind., traveled to Northern Uganda last summer on a Richter scholarship. There, he helped rehabilitate soldiers abducted into the guerilla leader’s rebel forces in the early 2000s – most of whom were children at the time of their abduction.

Before “Kony 2012” generated international news attention and more than 50 million views, DeKoninck created his own YouTube video about his experience in Uganda, the struggles of people he met, and their attempts to move on with their lives. In “Post Conflict Reconciliation,” he aims to capture the essence of forgiveness.

He created his five-minute film in part to help deepen his own understanding of the Ugandan tragedy, portraying the narratives of former LRA soldiers who faced slavery, experienced mutilation and were forced to murder innocent victims.

DeKoninck worked with Invisible Children, the non-profit group that created “Kony 2012,” to conduct his research in Uganda. Today, he credits “Kony 2012” for raising others’ awareness to an otherwise relatively unpublicized quarter-century war.

Get involved at WFU

“‘Kony 2012’ is amazing because the filmmaker went to Uganda when the war was at its height. According to some reports, anywhere from 20,000 to 60,000 village children came to the city each night to sleep for fear that they would be abducted,” said DeKoninck. “The pain and suffering Kony has wrought upon Uganda is substantial and he deserves to face justice. Invisible Children’s ability to share information and get people to care through this video is simply remarkable.”

“‘Kony 2012’ brought to the forefront atrocities against children that finally percolated to mainstream interest,” says Lischer, who served as DeKoninck’s advisor while he was in Africa.

Let us know what you think of this story on Facebook »

DeKoninck, who will study international politics in law school next year, plans to become more involved in activism efforts on campus. Currently, Wake Forest students are working to bring an Invisible Children chapter to campus and making plans to participate in “Cover the Night” in April.

He hopes Kony 2012 raise awareness among Americans who might otherwise have never heard of him.

“The most amazing phenomenon of our time is the ability of ordinary men, women, and children to become global actors and change the flow of world events simply by forwarding YouTube videos and talking with friends and family about such issues,” he said.