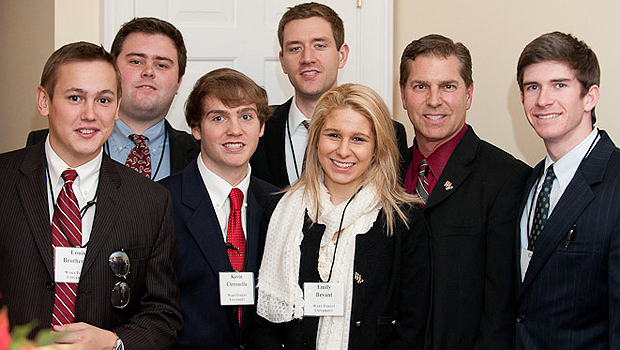 The Wake Forest Ethics Debate Team finished in the top four nationally in its inaugural season.

The team was formed in the fall of 2011 under the guidance of Charles Lankau, professor of practice in the Schools of Business. In November in Clearwater, Fla., the team qualified for nationals by finishing in second place in the Southeast Regional Ethics Bowl, which is part of the Association for Practical and Professional Ethics Bowl series.

In February, the Deacons won the N.C. Ethics Bowl, which took place at Meredith College in Raleigh. Read more about the victory »

In March in Cincinnati, the team won four rounds to advance to the semifinal round of the national finals of the Intercollegiate Ethics Bowl, which is also part of the APPE series. The Deacons lost by one point to Whitworth University, which went on to defeat Clemson to win the national championship.

“They were well-organized and focused,” Lankau said. “They demonstrated deliberative thoughtfulness and poise. Best of all, they showed great sportsmanship and integrity.”