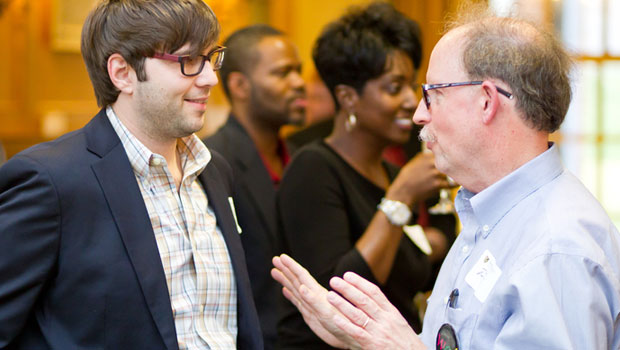 When pursuing a dream of writing for a living, getting good advice and making connections are essential.

Senior English major Morgan Schutte did both when she served as student ambassador for during Words Awake, a celebration of Wake Forest University writers and writing held March 23-25 that drew more than 250 people to campus for discussions, networking and readings.

She was paired with Wake Forest graduate Temple Northrup, who spent seven years writing scripts in Hollywood. Schutte said, “Temple told me ‘if you’re a genuinely kind and hard-working person, then doors will open. They may not be the doors you expected, but that’s part of the adventure.’”

Each of more than 50 Wake Forest writers was paired with a volunteer student ambassador for the weekend.

“Several Wake Forest writers are already working with their student ambassadors to offer writing advice and set up internships,” says Tom Phillips, the director of the Wake Forest Scholars Program and an organizer of the event. “In some cases, the opportunity for one-on-one time with an established professional mentor has provided the student with strong connections toward building a career after graduation.”

Aspiring middle and high school writers also had the chance to meet and be inspired by established Wake Forest authors. Eighteen alumni visited local schools to talk about their work. “One of the most important ideas to emerge from the Words Awake celebration was the need to inspire young people to think of themselves as writers and develop their writing skills,” says Phillips. “Local schools are already asking us to develop a program for continued outreach between Wake Forest writers and their students.”

As for the authors who participated in the event, Phillips says they also enjoyed conversations with one another and many are planning a continued exchange of information, ideas and contacts.

The event offered 16 panel discussions on topics ranging from writing poetry to the changing landscape of journalism to the art of teaching writing.  At a banquet on Saturday evening, 15 past and present Wake Forest writers were inducted into the newly-created Wake Forest University Writers Hall of Fame.

Students in Wake Forest’s Documentary Film Program filmed the panels and readings. Videos will be available online at the Words Awake website in late April.

• “The hardest part of writing is the beginning of a novel. I wrote my second novel in just three months – it all just came out. I didn’t know what I was doing. Now I realize mistakes I make [at the start of the novel] are going to haunt me in Chapter 11.” – Stephen Amidon (’81), author of “Subdivision,” “The New City” and “Human Capital”

• “With the growth of news sources on the Internet, more emphasis is placed on analysis rather than basic shoe-leather journalism.”– Shane Harris (’98), senior writer for Washingtonian magazine on trends in journalism

• “The old order of print journalism may be dying out, but students today have an opportunity to harness the power of the Internet with solid reporting where facts and accuracy matter.” – Mike Riley (’81), managing editor of Bloomberg Government on the state of journalism

• “Literary fiction is driven by character more than plot. The writing of a book is all about the blind exploration forward.” – Clint McCown (’74), author of three novels and two–time winner of the American Fiction Prize

• “Poets play with words, but it’s not child’s play”  – Poet Helen Losse (MALS ’00), discussing how ideas tackled while writing a poem can sometimes be dark and difficult

• “I’ve been confronted by people on both sides of the fence – crazy old hippies in Birkenstocks who called me a warmonger and Republicans who told me I was doing a disservice to my fellow soldiers — in any aspect of writing, you don’t write for your audience you write for yourself and try to stay true to the experience.” – Matt Gallagher, author of “Kaboom”

•  “I wrote sports from 1976 to 1988, the glory days for writing sports when newspapers mattered and ESPN didn’t. You had access to the athletes. They needed you.” – Steve Duin (’76, MA ’79), Metro columnist for The Oregonian

• “I’m interested in micro-level sports — the grassroots side. The soccer team populated by refugee kids, not another feature on Lebron.” – Joy Goodwin (’95) author of “The Second Mark,” a Sports Illustrated Best Book of the Year