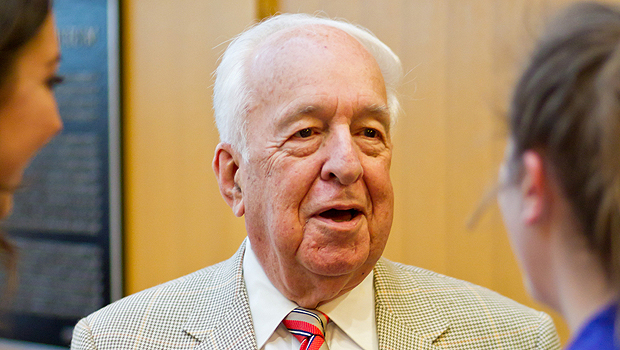 Provost emeritus Ed Wilson assumed the posture of Janus, looking to the past and future, as he addressed the audience gathered Friday evening for the concluding event of Words Awake’s inaugural day. With characteristic clarity and elegance, Wilson wove together texts and reflections that joined the rich humus of Wake Forest’s literary traditions with the achievements of contemporary and the promise of future writers.

Wilson titled his address, “Three Chapters in the Story of Wake Forest.” Each of his three chapters framed a discreet chronological and cultural period. Wilson noted that he had taken as his guide an essay he remembered reading as an undergraduate in the Student in 1938, written by Gerald Johnson and entitled Six Characters in Search of an Author.

“What I might call the first chapter in this history of writers at Wake Forest ended in 1939 with the outbreak of World War II,” Wilson said. “A second chapter continued … until 1959, when the last students who studied on the old campus graduated.”

Before moving on to his final chapter, Wilson took a moment to characterize the climate of the first two.

“I have always challenged the notion, held by some outsiders,” said Wilson with a smile, “that the Wake Forest of the past was backward or provincial or narrow-minded or too much compromised by Southern Baptist doctrine. Dancing and drinking were prohibited, to be sure … but the classrooms were free, discussions among students and teachers were daring and lively, and the imagination was boundless and unfettered. It was in that environment that some students began, with hope, to see themselves as ‘writers.'”

Write What You Know

Two inductees into the Writers Hall of Fame have written autobiographical novels that portray Wake Forest. Laurence Stallings’ Plumes was published in 1924. Russell Brantley depicted the college in his The Education of Jonathan Beam from 1962.

Wilson prefaced his final chapter with a quick portrait of journalist, photographer and screenwriter Laurence Stallings (’16). “Because of the diversity of his talents and a career that took him far from the South … , I see him as providing a transition to the writers of the world that most of you inhabit.

“… You,” Wilson said, nodding at the audience, “are the writers of Wake Forest’s third chapter, the chapter that began in 1959, and we look to you to continue, with energy and with courage, the best of the Wake Forest traditions that are being honored here tonight – a tradition, by the way, that became amplified and strengthened in the 1960s when more and more gifted women joined your ranks.”

Wilson concluded by reading Walt Whitman’s poem, “Poets to Come.”  He imagined all the writers of Wake Forest’s past speaking to present and future writers with Whitman’s words.

“Tonight I leave it to you – a new brood, native, continental, greater than before known – to prove and to define what is to come, and I expect the main things from you. Now, I and my contemporaries – hurry back in the darkness.”