A clothesline for human rights 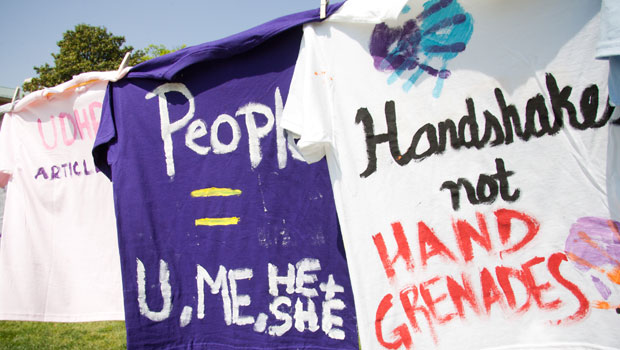 Junior political science major Ariella Akeza traveled to Burundi with her family in 2008 to visit relatives. During her visit, she met many people who were affected by the civil war there in the 1990s — including her cousin, who was paralyzed on one side of her body after an attack during the conflict. 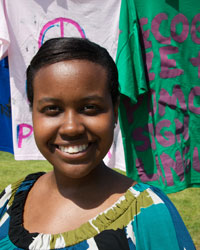 “Meeting my cousin and hearing her story was a reminder that human rights are not just an idea or a homework assignment,” said Akeza. “My family’s experiences have inspired me to learn more about the importance of human rights and to help educate others.”

With help from the Wake Forest University chapter of Amnesty International, the group organized two tables with fabric paints and brushes where community members could paint T-shirts with messages focusing on women’s rights, children’s rights, ending torture, immigrant rights, rights for the handicapped and food justice. The painted T-shirts were hung on 120-feet of clothesline. 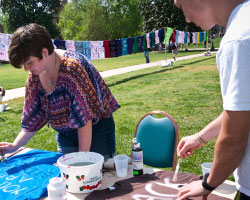 Leann Westin and Will Readhead paint T-shrits for human rights.

Sophomore Will Readhead said he decided to participate this year when he noticed last year’s T-shirts in a display case in Tribble Hall. “I saw the shirts on display and wondered what they were about. That people create their own shirt is more meaningful than a simple poster,” he said.

“Human rights treaties are written as awareness is raised about pressing issues, and as the world grows and changes, new problems develop,” said Willis, who teaches in the women’s and gender studies program. “For example, a convention on human rights to water has been in the works as conflicts over water rights have led to war. And the challenges of access to water are expected to grown. But we have to raise awareness now as treaties often take decades to write and sometimes even longer to ratify.”